The MAC Mini is not only "The most affordable and most energy-efficient Mac ever", it is also the smallest, the sleekest and by far and away the most versatile computer available. By versatile, we mean for modding, making it perfect for any computer modders creative vision.
In this post we have a selection of unbelievably creative MAC mini mods and two mods that simply want to be a MAC Mini. 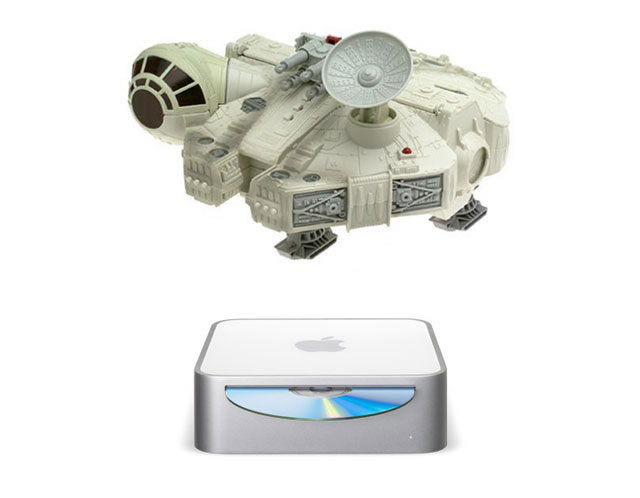 How about having your very own Millenium Falcon as a Media Center computer? Pretty cool, right? You could picture it sitting, with its pride of place, on top of your widescreen television.
Thats exactly what Derrick Hixson did. He bought the Millenium Falcon toy for $20 from a local Disney store and soon realised that it could house a MAC Mini with ease, with relative ease anyway.
Click here to read about how he created this awesome computer here: 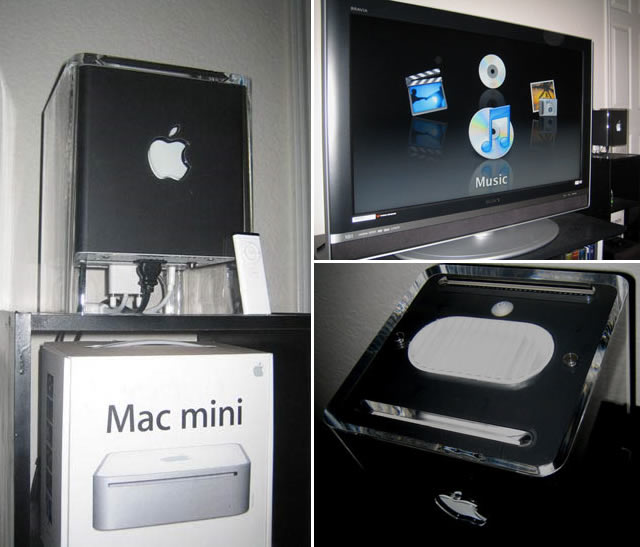 The inspiration for this mod came from the Fifth Avenue Apple Store and the black Macbook. The creator wanted to recreate the G4 Cube, as if Apple had never discontinued it, and make it into a true media center. He did not want to simply put the "guts" of an Intel Mac Mini inside and "dress it up", but to refresh the Cube and create something that could stand out. 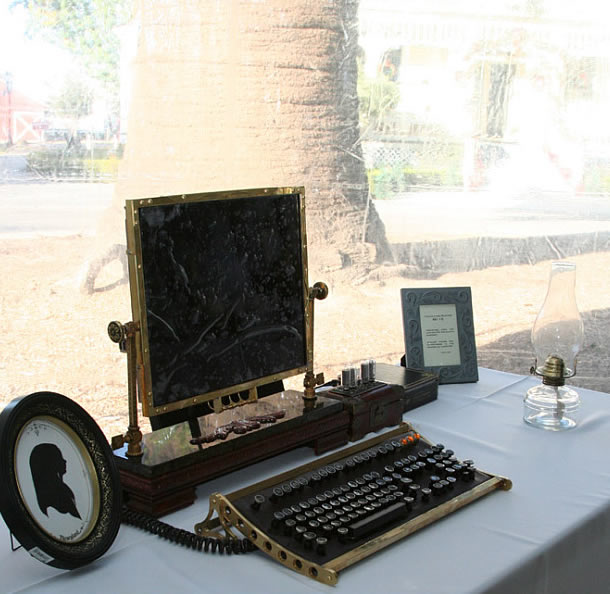 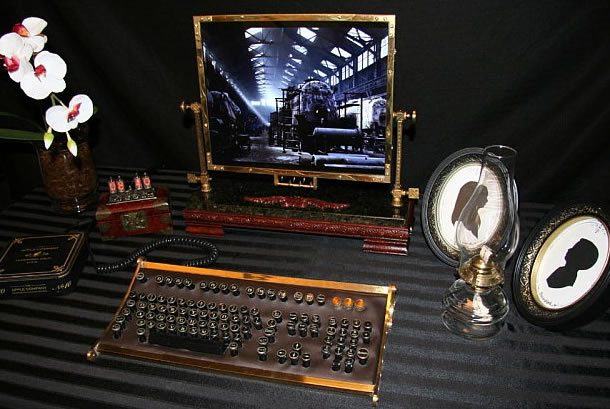 This is perhaps the most impressive MAC Mini mod you will ever see, it is amazing. Created by David Veloz for his soon to be wife in time for their wedding. The creator describes “steampunk” as the intersection of technology and romance, what a beautiful notion. 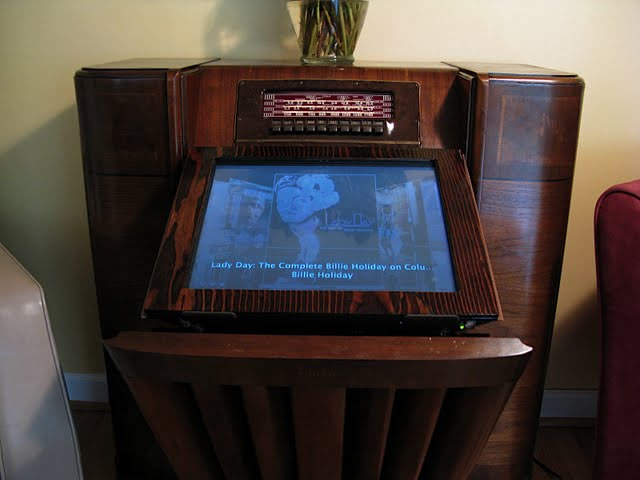 What do you do when you have an old 1942 Philco radio sitting about doing nothing? Well, you gut it, add a Mac Mini and 17" Sony monitor with touchscreen, and turn it into a classy networked digital media cente. Of course you do! 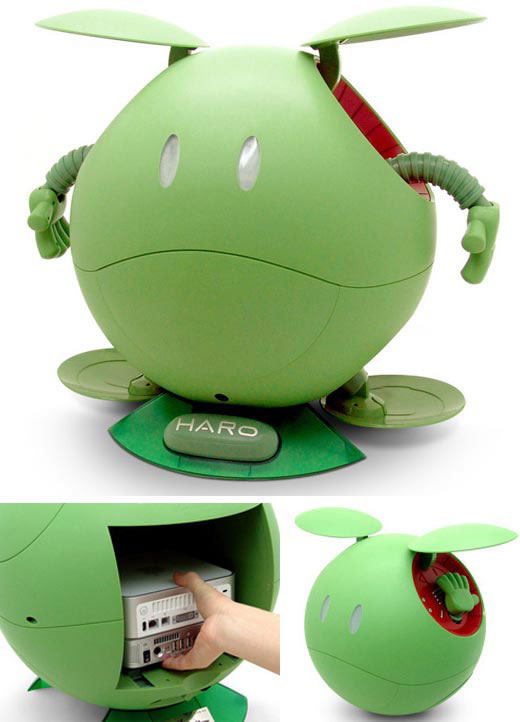 Fans of Haro from the Gundam series will definitely be thrilled to see the Haro PC case being made available. While it is not exactly a bona fide PC case since it does not come with all the necessary ports but instead stores a really small form factor computer, such as the Mac Mini.
When powered, the Haro case provides animated expressions that can be controlled via the remote. Moving parts include its ears, while its LED eyeballs can light up for added effect. Cool. 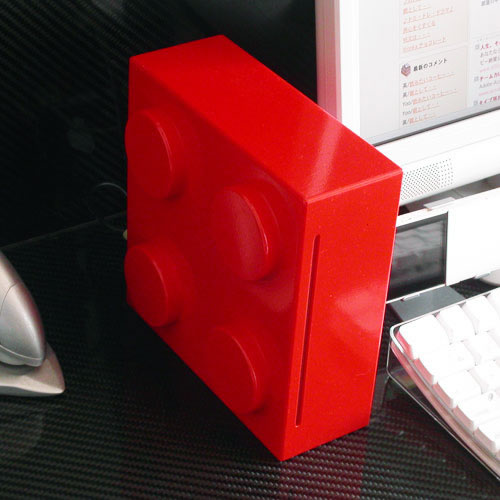 Those that read this blog regularly will know how much I love Lego, so you can imagine how much I would love on of these. The problem is I could not find any details about how this marvellous mod was built nor who the creator was. If anyone can help I would really appreciate it. 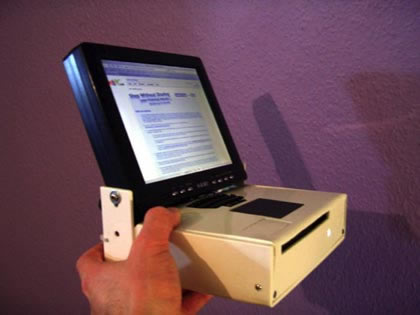 This is certainly not the most beautiful laptop in the world, but it is original and creative. Peter Green, took his Mac Mini and modded it out with a mini keyboard, track pad, battery (3 hour life), and an 8inch fold away screen. 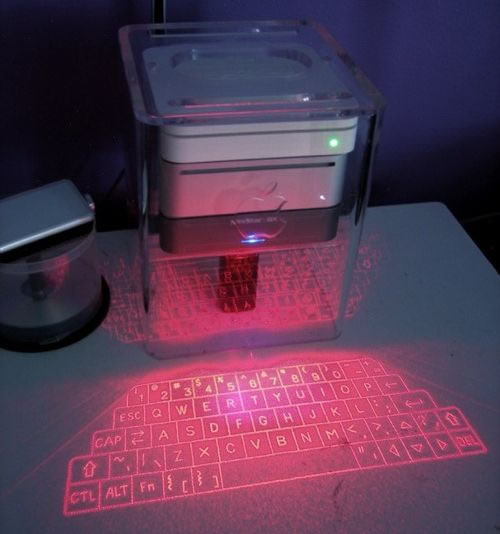 Like the abandoned shell of a hermit crab, Mac enthusiast Rich Willis removed the innards of the old G4 cube and filled its guts with his Mac Mini as well as some add-ons. He even went the extra mile to add a virtual laser keyboard so the whole thing is nicely self-contained. 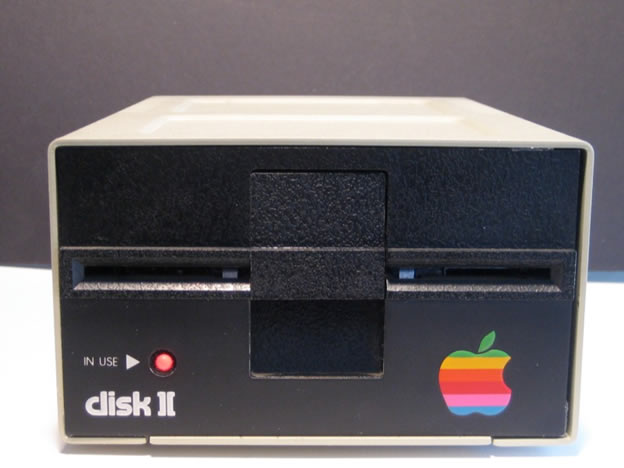 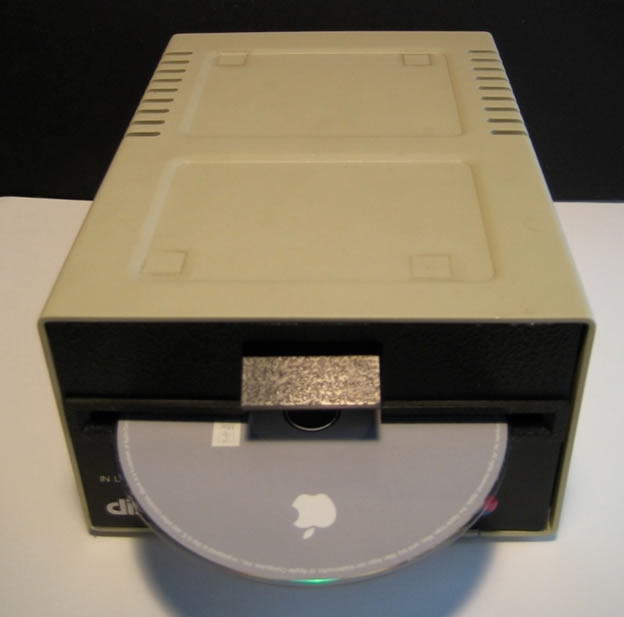 MacModder Option8 has taken a MAC Mini and stuffed it inside a classic Apple external Floppy Drive. You tend to forget how big these old drives were and how little they actually did, power-wise. Now with the added inclusion of a MAC Mini the power of this drive has reached levels it never ever could imagine. i am loving the retro look. 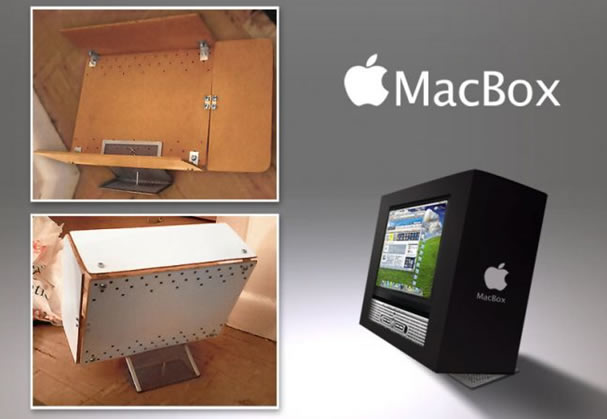 The creator of this mod wanted to make his Mac Mini portable without having to tear it apart. So, he built an enclosure, bought a cheap car dvd monitor off ebay and threw this portable box together. All you have to do is simply slide the Mac Mini into the box and plug it in and you have an iMac style mini. There must be a market for these things, would you not buy one? 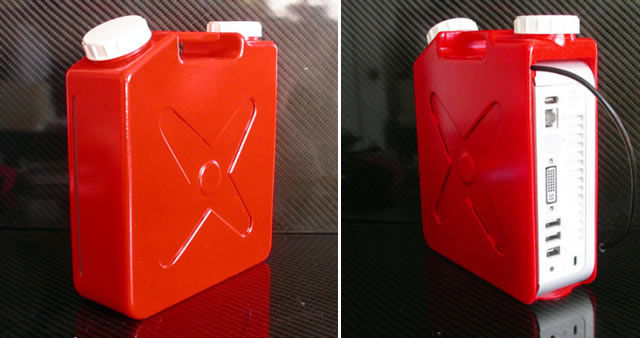 If you are looking for a little bit of originality with you MAC Mini modding, you will love this mod. It is a seamless bright red petrol can and your MAC mini will slot into the back with ease. I think this looks great, its a wonder they don't market these. 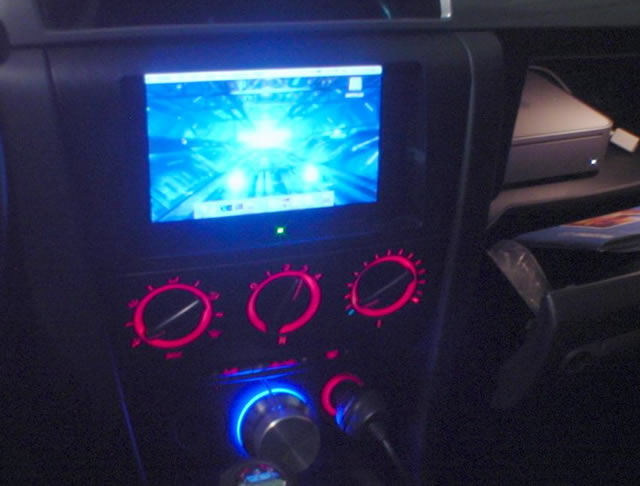 Matt Burriola installed a Mac mini into his 2005 Mazda 3 sedan and documented the entire installation process. His goal for his project was to create a system with better than stock sound and capability, while maintaining a clean, stock appearance.
You can view the step-by-step process here: Mac Mini Carputer Install.

U. of Oklahoma's Mac Mini Robot 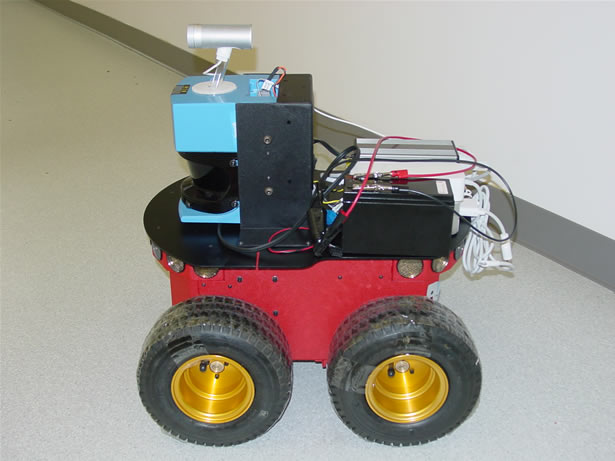 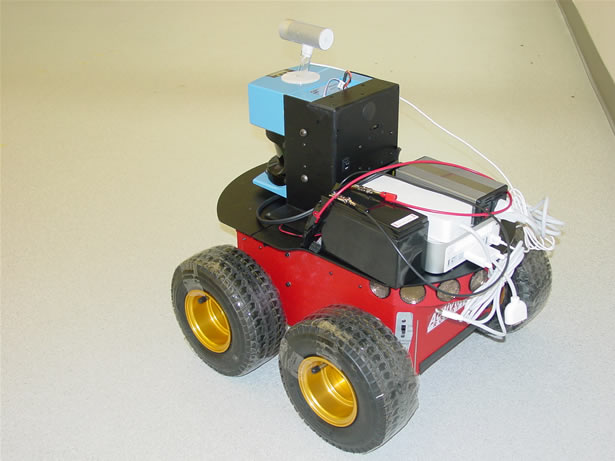 The University of Oklahoma built this mobile robot, powered by a MAC Mini, to prototype a visually and aurally tele-operated robot before designing their own from scratch. It's based on the Pioneer 3-AT robotics platform and is controlled via a USB-to-serial connection, with visual feedback provided via iSight. I want one of these. 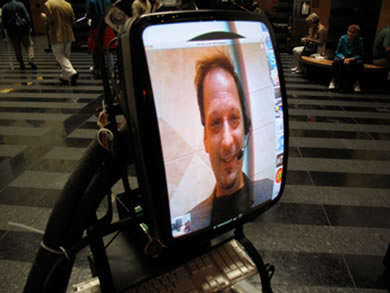 Sparky, made by San Francisco artist Marque Cornblatt, is a robot powered by a MAC Mini, built in with Skype, and a wide array of wonderful gadgets.

Mini iMac Mod Wants to Be a Real Mac 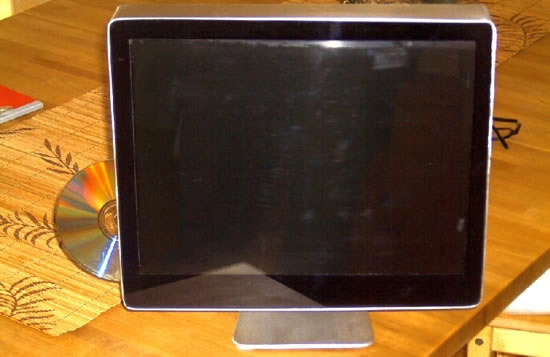 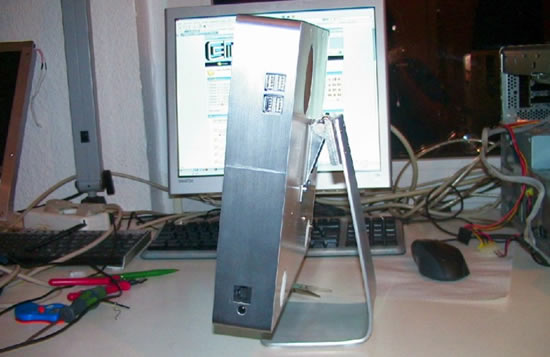 Not a MAC Mini mod, more of a mini MAC-a-like creation this one. German modder Phyro-Mane took an old laptop and hacked it together to resemble a scaled down iMac, icalling it the iMacmini. But strangely, it runs Windows XP skinned to look like OS X. The mod features a 14-inch screen, AMD Athlon XP 1700+ processor, 20 GB HDD and 512 MB RAM. Now, even PC users can have the sleek and stylish MAC look. 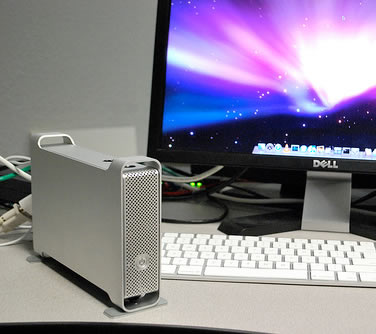 An intrepid modder was given a sad, water-damaged MacBook and turned it into his own little Mac Pro Mini with a little know-how and a $40 Mac Pro case knockoff. His MacBook's motherboard worked, but LCD, HDD, battery, memory, keyboard, and DVD drive were all busted. After replacing the HDD and memory, he set out to stuff his cheap-o case with the corpse of his MacBook.