This past week, Google Chrome overtook Internet Explorer to become the most used web browser in the world (well, at least for a day). While calculating the exact figures when it comes to the internet is hardly a precise science, Statcounter shows that Chrome has been growing at a steady rate at the expense of both IE and Firefox.

Ever since its inception, Chrome has been winning converts and its rise in popularity does not seem to be stopping anytime soon.

If we look at the Statcounter data closely, there are some interesting revelations:

• For a start, IE is still the runaway leader in North America, whereas Firefox dominates the scene in Europe and Africa. Chrome has a tremendous lead in certain parts of Asia and South America (where Chrome’s share reaches as much as 50%).

• IE fares well during weekdays (excluding IE9, which puts up a decent show on weekends), whereas Chrome wins on weekends, perhaps indicating that people tend to use Chrome at home to browse on weekends, while IE is still ‘enforced’ in certain offices. 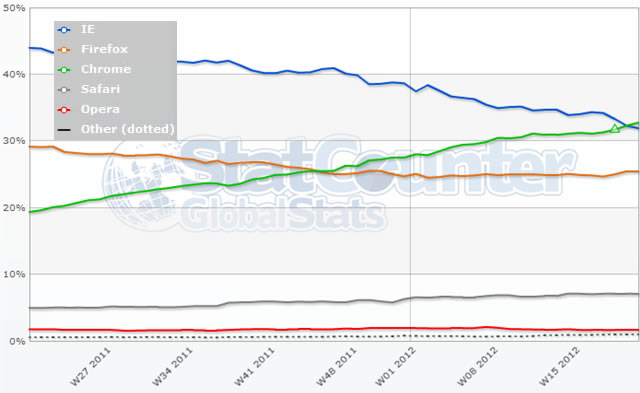 Until last year, IE had as much as 45% of the market share – today, its supremacy is very clearly under question. What will the figures be one year from now?

Any guesses or thoughts? Feel free to share with us in the comments.