Why You Should Choose iOS When Building Your First Mobile App

When designing a new mobile application, the biggest question you will need to ask yourself is where to launch it. The best decision you can make would be to start building for just a single platform at a time. It is always better to start small and later move on to other devices and platforms.

Mastering a single platform is already a tough challenge. You need to test your app to know and understand all of the possible development difficulties so that you can build experience in one mobile operating system before moving on to the next.

Anyway, there you are, wisely planning on starting your new mobile project on a single platform. But, you’re already facing a fundamental issue that defines the success of the entire operation. In other words, you find yourself wondering whether you should build an app for Apple’s iOS or Google’s Android. They are the obvious choices as they both make up over 90% of the total market share.

Now, we know what you’re thinking – this battle is pretty old and boring. Yet, it is not solved. The final decision for each requires some good rationalization. And since our priorities among platforms are clear, we’d like to start with a proper Android vs. iOS development analysis as a way to show you why iOS application development is the most rational choice.

First thing’s first, you should start with a closer observation of the market you are about to enter. You should decide what kind of people will be downloading your application, what they need it for and whether they will be willing to pay for it. Answer all of those questions and then make a comparison of whether you see the advantages of iOS.

If you plan to charge for your app, or to make sales through your app, your pros and cons list will always favor iOS. And here is why: Even though Android has the biggest market share, which is about 80%, it does not make Android the most profitable platform for app developers. 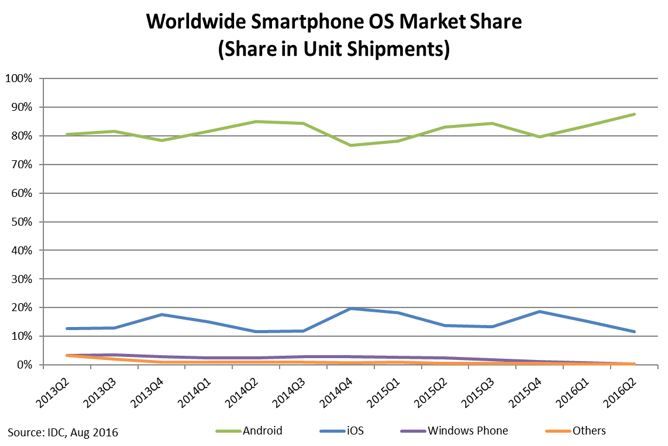 In fact, Apple completely dominates the profit share. It makes over 85% of revenue for app developers, compared to Android. The recent statistics shows that Apple users tend to spend almost five times more than other platform users.

Loyalty: iPhone users are commonly happier with their operating system whereas less than half of Android users (48%) are merely satisfied with their digital devices. Apple has an impressive 62% satisfied users. Apple users are far more loyal and engaged which makes them less prone to switching to other platforms.

Demography: Android might have the broader market, but this can make things harder for app developers. Its audience is more difficult to predict since it has a wider range of prices for its devices and its popularity is spread over the entire globe. On the other hand, iOS users are typically found in the US or Europe.

Business: Apple has completely dominates business. Enter any business meeting, and you will see a group of people all with the same brand of phone, tablet or laptop – all of them will have an Apple logo on them. There are two explanations for this. First, iOS has more applications designed for businesses and, in general, their devices are considered as the more secure and appropriate choice. And second, it’s a matter of prestige and utility among people of a certain class.

Model: It is just more common for Apple users to pay for apps. First, they tend to have fewer devices, which makes them invest more in what they have. Secondly, they have the means to spend more. Their loyalty to the product makes them pay for the latest models. And the person who has already spent money on their iPhone would not be inclined to spend a little extra on an application or game.

Apple’s App Store cautiously reviews the quality of all apps. Buyers don’t have to worry too much if the app they are downloading is worth their money. Moreover, it is more tempting for startups to publish an app in the Apple App Store first, since it creates much more of a buzz and, eventually, leads to more success stories.

You may have already noticed that iOS applications get a lot of attention in the mainstream press. The only disadvantage here can be the actual publishing process since Apple has a lot of checkpoints and testing to overcome.

Now that we’ve done the market analysis, we can finally approach the technical part of the project. If you have researched app development, you might have already read that developing for iOS is considered to be a little bit easier than Android. This is mainly because the majority of programmers find Apple to have better and stronger tools, along with a much more user-friendly interface. But let’s have a closer look at pros and cons of iOS app development.

The development environment from Apple seems to be created to make app development extremely welcoming to everyone. Coding with Xcode can be only a pleasant experience. It’s fast, powerful, features a great workspace to keep you focused and offers helpful information as you type. Android’s Eclipse, on the other hand, is completely the opposite of Xcode. The work there is messy, slow and seems to create more discomfort than help.

Talking about programming languages, we would like to focus on Java for Android and Swift for Apple. The latter is still new and unfinished, but already appealing to us. You are more than likely already familiar with Java, so there is no need to describe its pros and cons. Anyway, we are giving our vote to Swift since the language does have such a great potential.

Last but not least, you should pay attention to the amount and types of devices. Unlike Android, iOS has no intention of expanding the number of devices it has at the moment. Such a limitation is great for developers since you only have to consider a handful of devices.

Creating one app that works well across all types of devices is a significant advantage. On the other hand, creating an app for Android, considering the huge amount of devices it has can be time and cost prohibitive. Of course, this applies more if you are a single developer, not a big company that can hire enough programmers to manage a project like that.

6 Reasons to Start with iOS

If you are still not entirely convinced about your platform choice, here is your biggest motivation for choosing iOS. Take a look at some of the most popular mobile apps. You’ll see a common feature among them all. They all gained their success via the Apple App Store. Instagram, WhatsApp, SnapChat, Draw Something – those are just a few examples.

To sum up, we have shared our thopughts of why app development for the iOS platform can be beneficial. Here are our most compelling reasons to build your application in iOS first:

Hopefully, this will be helpful for those who were in doubt. These days, it’s getting more and more common to launch new apps on iOS first – following the example of successful applications like Instagram or Angry Birds. By doing this, you can ease yourself into starting up, save some time in the development process and create more opportunities for monetization.

And who says that after a successful start on one platform, when you’ve gained enough experience, you can’t start developing for Android?