The 3 Common Personality Types of the Best Designers

It has been said that the strength of a team comes from different perspectives and personalities. This is never truer than when applied to web design. From expressive extroverts to quiet creative geniuses, great web design is built from the workhorse of a compilation of different personality types, all working together to achieve the same end.

Our personalities determine which job we’re best at, but that doesn’t mean web design is only mastered by one personality type. Web design needs builders, specialists, opportunists, innovators, and many other types of entrepreneurs to be successful. However, some personality types are more inherent to designers.

A study by Strategic Aesthetics used the Myers-Briggs Type Indicator to test 64 designers. The results show that most designers share certain personality traits, but the highest percentages of designers aren’t always what the media portrays them to be. While the stereotype of the best designers is that of an introverted, anti-social, shy person, the study concluded otherwise. 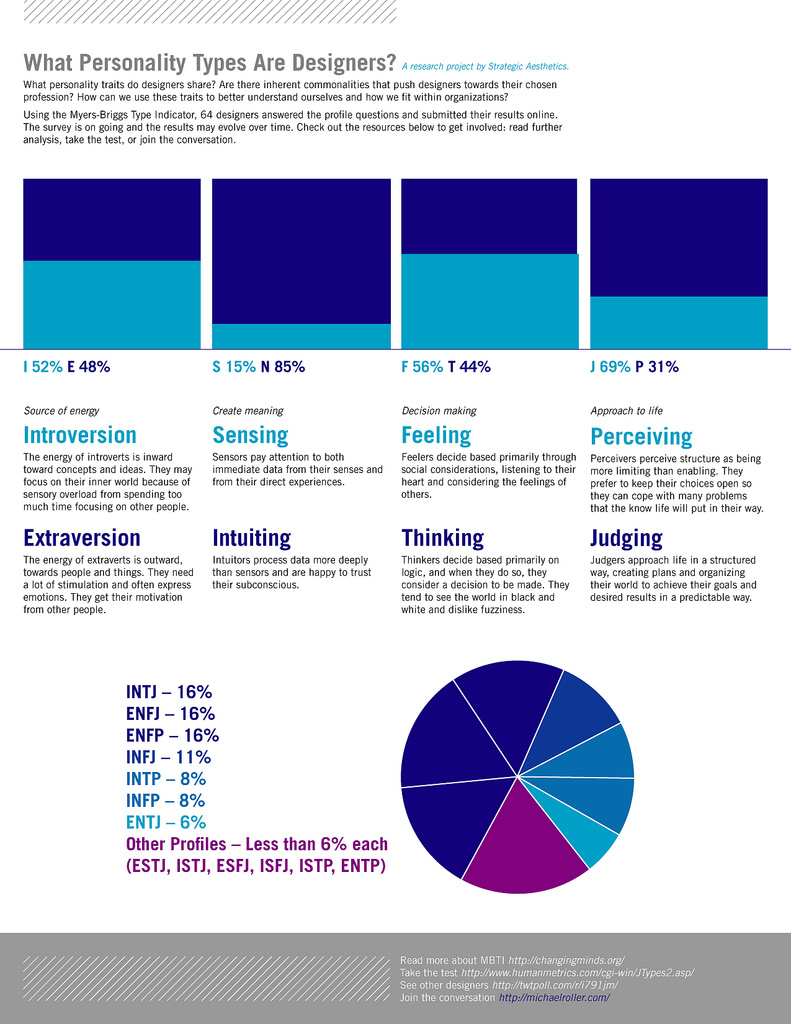 Tying with two other personality types for first place, the INTJ type came in with 16% of designers surveyed, more or less following the typecast – introverted, intuitive, thinking, and judging. These personality traits describe someone who prefers to work alone, without guidance from others in the workplace.

The introvert is generally slower to speak his or her mind, since they carefully process data before sharing it with others. They are smart decision-makers who weigh all their options before coming to a conclusion, and have great attention to detail. Introverts also have a skill for focusing on a task and channel their creative energies into their work.

The intuitive thinker listens to the subconscious mind and processes data more deeply than those who trust their direct experiences to make decisions. This pairs well with the thinker personality type, who decides based on logic and black-and-white worldviews. Thus, the combination of intuiting and thinking is a popular personality type among designers. They take their time making decisions and trust their first instinct when it comes to making web design choices.

The last portion of the INTJ personality type, the judging character trait, lends itself to designers who need structure, planning, and organization to succeed. They achieve their goals in a patterned, predictable way, and use the same tried-and-true techniques that worked in the past to sculpt their future.

Although the introverted personality type is most prevalent in designers, extroverts have excelled in web design, as well – with talents such as the ability to speak in front of crowds or connect with people around them. These skills put extroverts in a position to succeed, while introverts often get overlooked.

Two other personality types tied for first place among designers; both included the extrovert trait, displacing the common belief that the best web designers have to fit the work-for-yourself, independent type, and born to be an entrepreneur. Web design allows extroverts to flourish in an atmosphere that welcomes new ideas, outward energy, and a knack for knowing what other people want.

Extroverts do well as web designers, because they make decisions primarily based on social considerations, putting them in a prime position to understand the needs of web users. The feeling portion of the ENFJ personality type makes them express emotions and listen to their hearts and the feelings of others to make decisions.

While introverts rely on data and logic, extroverts are more willing to base decisions on how they make them feel. This is a useful trait in modern design, where websites are constantly trying to attain organic search engine optimization (SEO) and user interest to spread natural brand awareness. Being attuned to how users react to a website allows extroverts to make design choices that improve the website’s attractiveness.

For designers to be able to communicate comfortably with their team about ideas is an important trait in the workplace, and places extrovert designers at the forefront for excelling. However, both introverts and extroverts should comprise a team of designers, not a monopoly of one over the other.

The final type that tied for first place is very similar to the second type, but carries the perceiving trait rather than the judging trait. This places a designer in a position to think more freely than the judging type, who prefers structure. The ENFP personality type carries all of the same communicative, subconscious, and emotional traits as the ENFJ type, but instead of benefiting from predictability, they like to keep their options open.

Perceivers see structure as a limitation to their creative process and flourish instead in a workplace that encourages outside-the-box thinking. They are the most confident when they feel they can cope with many different problems in a variety of ways, instead of being bound by a specific set of rules. This personality type does well in a web design atmosphere, because they can react to evolving needs of users, such as the need for interactive web design in today’s online marketplace.

For every profile type greater than a 6% match in the study, the “N” factor – intuition – was present. The design thinking process calls for an undeniable need for personal style and the ability to make judgment calls based on one’s own intuition. While using immediate data and direct experiences may come in handy when it comes to the technical side of things, trusting your subconscious feelings can lead to amazing designs, unique choices, and a deep-down understanding of what users want from a website.

A more intuitive, feeling designer is able to break the rules in a way that makes their design stand out among the rest – a coveted ability in today’s competitive market. The intuitive designer has a knack for coming up with solutions that make them happy. This ability translates well for UX (user experience) design practices, which keeps user experiences at the forefront of decision-making and ultimately leads to better conversion rates.

By honing your dependence on personal instinct, you can better perceive users’ needs and react to them efficiently. Most designers trust what they feel is right and can sense what they think the user wants in any situation. Thus, intuition is a prominent trait among designers, because design as a whole should fill a need.

Making the Most Out of Your Personality Type

While the results of the study point toward a specific set of personality types, a great designer can come in any shape or form. There are natural traits found in many designers, but that’s not to say they can’t be learned, developed, or nurtured over time. You don’t have to fit the “mold” of a web designer at birth to be successful – in fact, what sets truly great designers apart from the herd is a passion for the craft.

What good web designers really need to be are team players. A solid design team includes every type of personality, which is what makes the field the exciting mosaic it is today. Introverts and extroverts, judgers and perceivers, feelers and thinkers – all are necessary and important parts of the field of design. Hone your own skills, and learn to excel with what you have in your toolbox.

You can understand your type by taking the Myers-Briggs test, yourself, and compare your results with those found in the designer study. Knowing your personality type doesn’t tell you what you can’t do – rather, it allows you to make better judgments, perceptions, and decisions based on the way you operate. Let your personality type shine in a world that needs individualization to thrive.