Dispersion effects create a fantastic look in your finished photos. This effect works by taking an image and then breaking it up on one edge to appear as though it’s been broken up into tiny pieces. As you might imagine, creating this image manually would be pretty tedious. However, this can be easily remedied by the use of Photoshop actions.

Several Photoshop actions make it possible to create a dispersion effect with just a few clicks. And for your convenience, we’ve compiled a few of them here today.

While these actions share a similar theme, they vary in color options, opacity, texture, and several other variables. Take a look for yourself!

First up is the Dispersion Photoshop Action. This one is super easy to use. Just brush it over the area of the photo you want to disperse, choose a direction you want the dispersion effect to go, and play the action. That’s it! 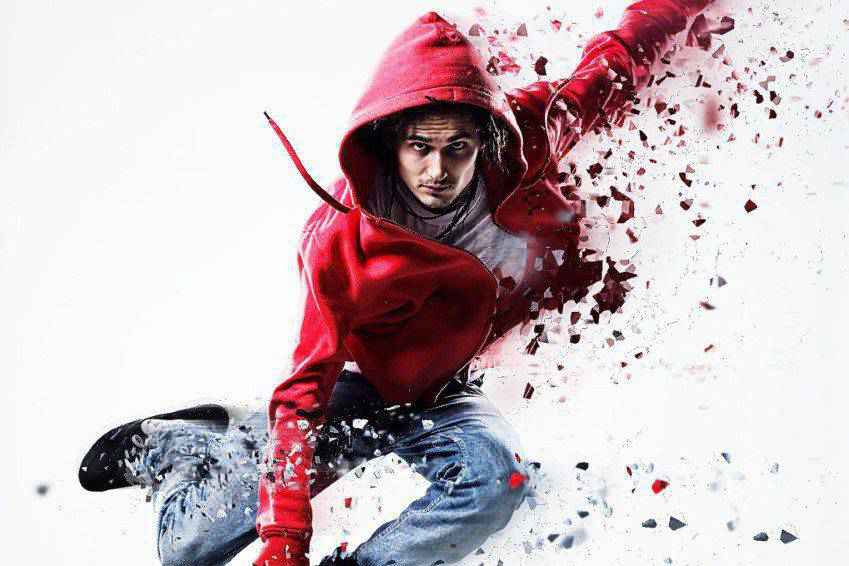 Another great option is the Elementum Dispersion Photoshop Actions. It works by breaking up an area of a photo that you select. You can choose from four different directions to point the dispersion effect, and it’s super easy to use and implement. Other features include ten color presets and graphic elements, and it’s fully editable.

You might also want to consider the 3D Dispersion Photoshop Action. It works similarly to the other dispersion effects on this list with the addition of a three-dimensional particle effect. Select the area you want to add the effect, select a direction, and click play. 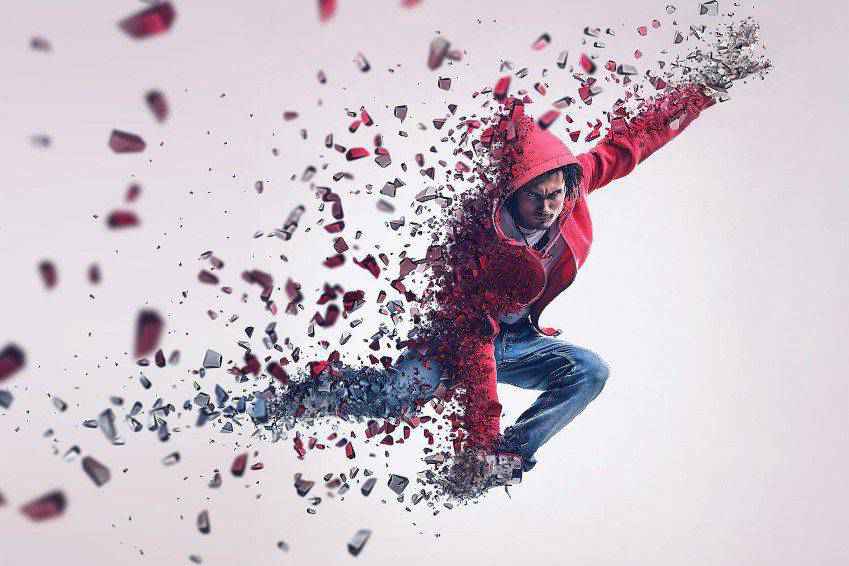 This action diffuses rather than disperses but earns a spot on this list because it provides a similar result. With the Diffusion Photoshop Action, you can create a particle diffusion effect with just a couple of clicks. Pick from four directions and click play. And it comes with a written and video tutorial for reference. 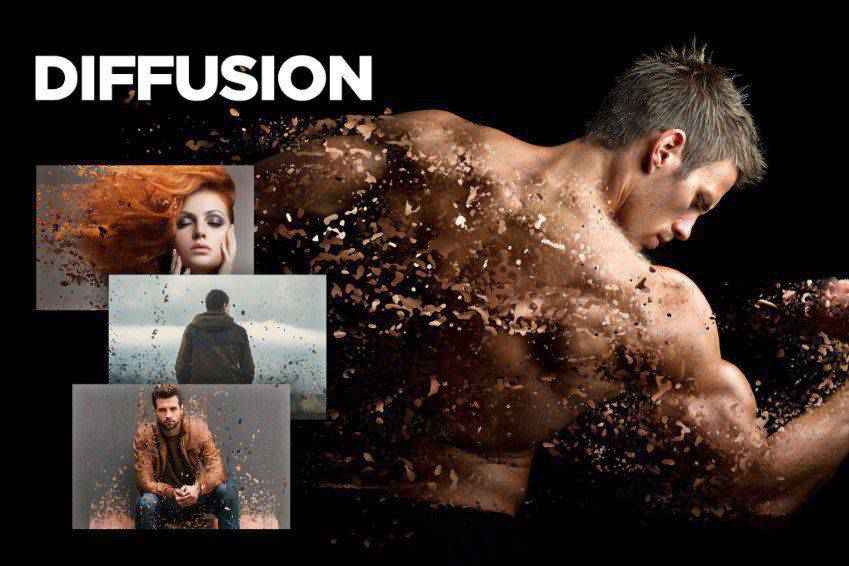 The Geometric Dispersion FX Photoshop Extension is an excellent addition to this list. This action breaks apart an image into geometric shards, almost like broken glass, with geometric shapes floating off from the primary picture. It can be enhanced with patterns and shapes as well. 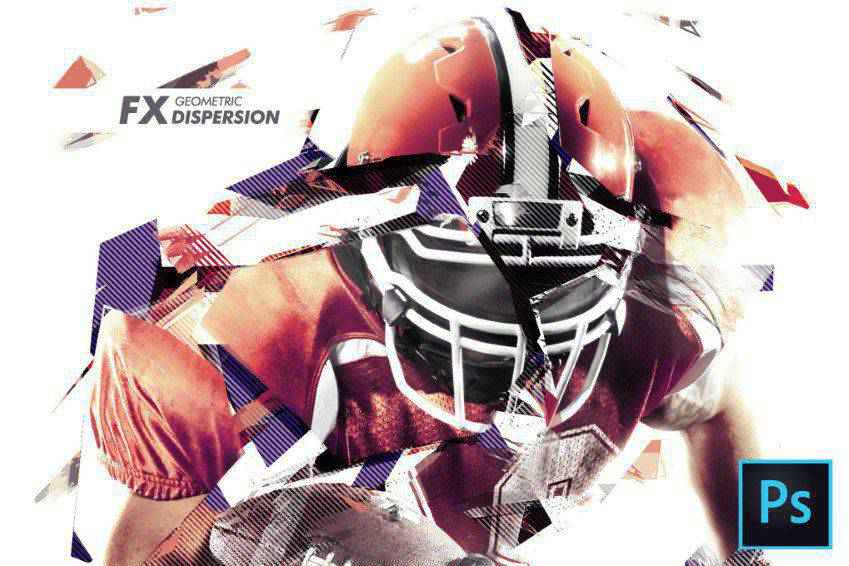 Another solid choice is the Feathers Dispersion Photoshop Action. With just a few clicks, you can create a dispersion effect that breaks apart a section of your image into feathers. You can select from five dispersion directions and ten color presets. 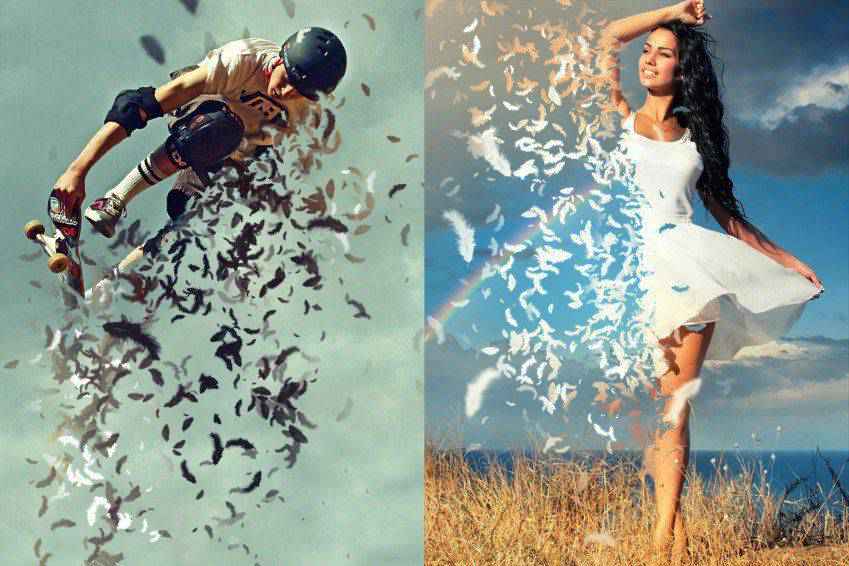 Another option you might want to consider is the Dispersion 2 Photoshop Action. This one is super straightforward. Just brush it on a select area of a photo and press play. That’s all there is to it, and the result makes it look like the subject of your photo is disintegrating. 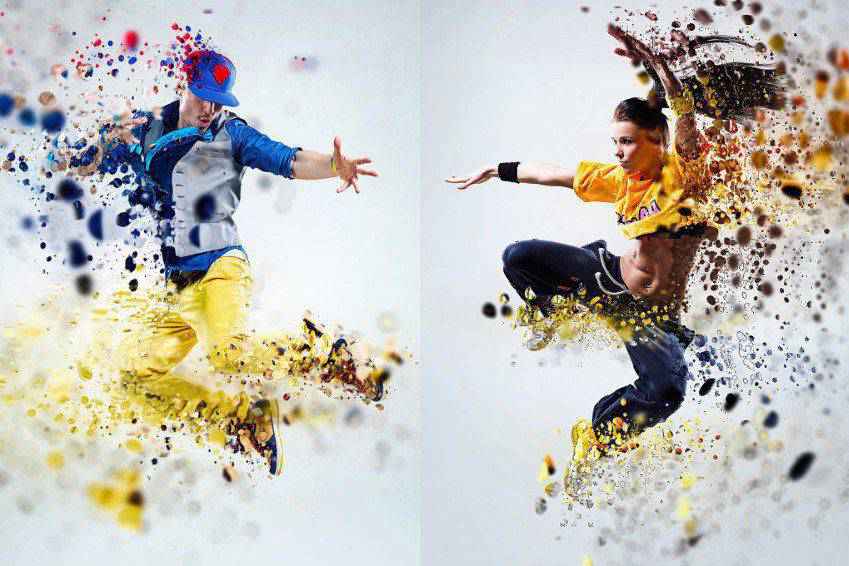 The Tornadum Dispersion Photoshop action is another fantastic selection you might wish to consider. Once applied to your photo, it makes it appear as though a tornado has broken up the object of the scene and sent pieces of it into a direction you specify. It also comes with ten color presets and is fully editable. 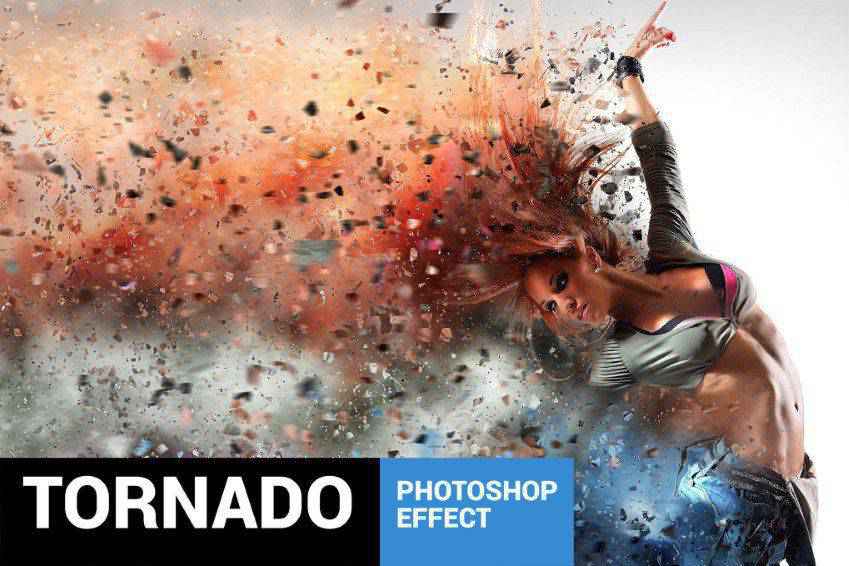 The Commetum Cosmic Tail Photoshop Action applies the same dispersion effect to your photo as others on this list but adds a fascinating light element to the mix. The dispersion here looks almost like sparks. It comes with ten color presents, graphic elements, and complete instructions as well. 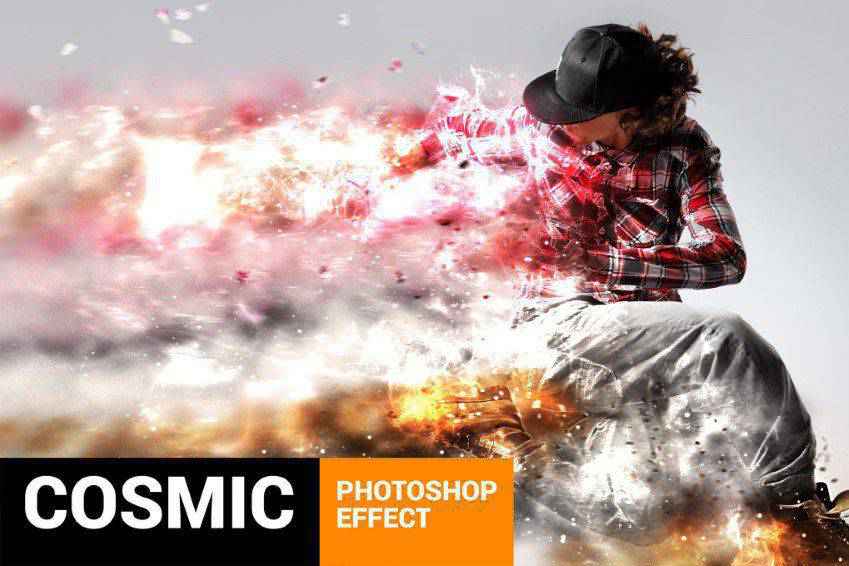 This is another excellent effect you might want to try on your photos. The Ashes n Embers Photoshop Action works by creating the appearance of an explosion on an area of your photo that you select. The dispersion looks like ashes and embers drifting away from the subject of your photo. Select the dispersion direction from 10 color presets. 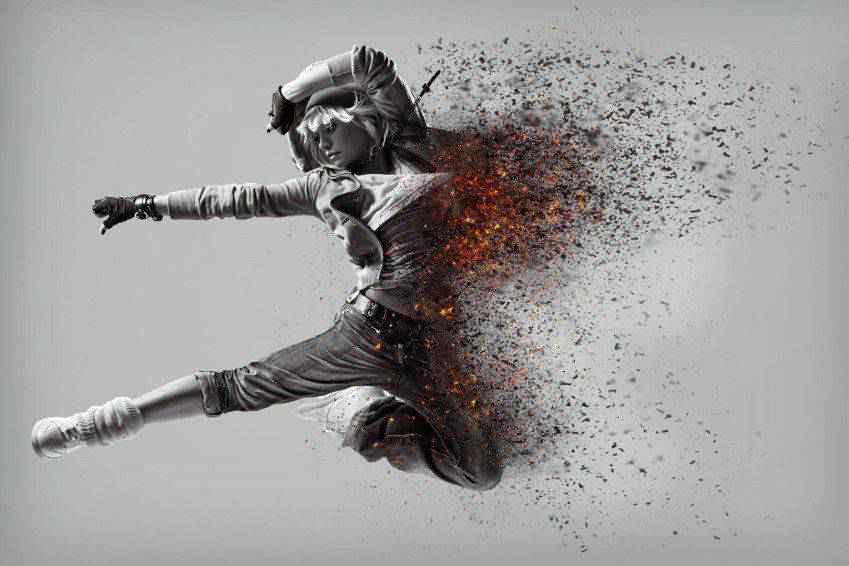 Another option is the Pixelum Digital Pixelation Photoshop Action. This one has four different actions that allow you to select the direction of the dispersion, which looks like the image is breaking down into pixels. It comes with ten color presets, graphic elements, well-organized layers, and a text-file user’s guide. 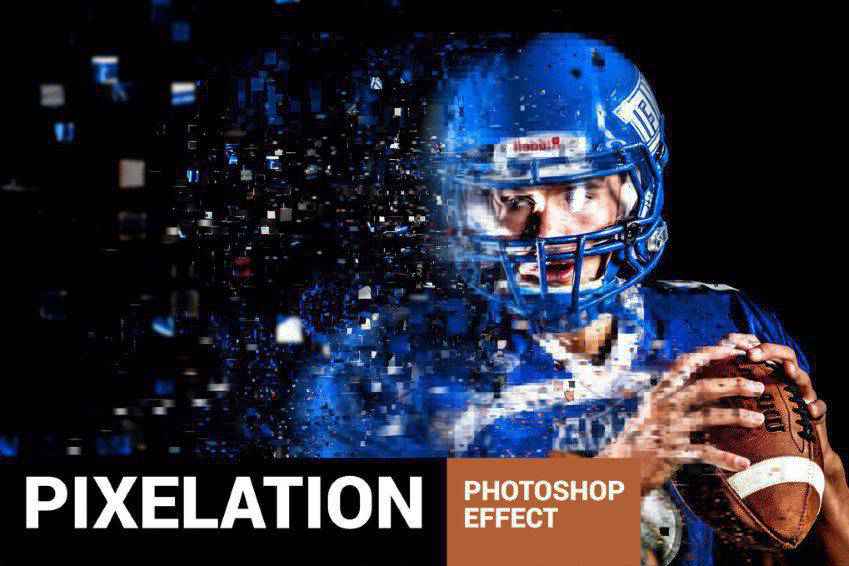 The Sand Dust and Powder Explosion Photoshop Action offers a really interesting effect to your photos. It adds the appearance of sand or dust exploding out from a segment of your image. The result is professional, and the action comes with a written and video tutorial to help you figure out how best to use it. 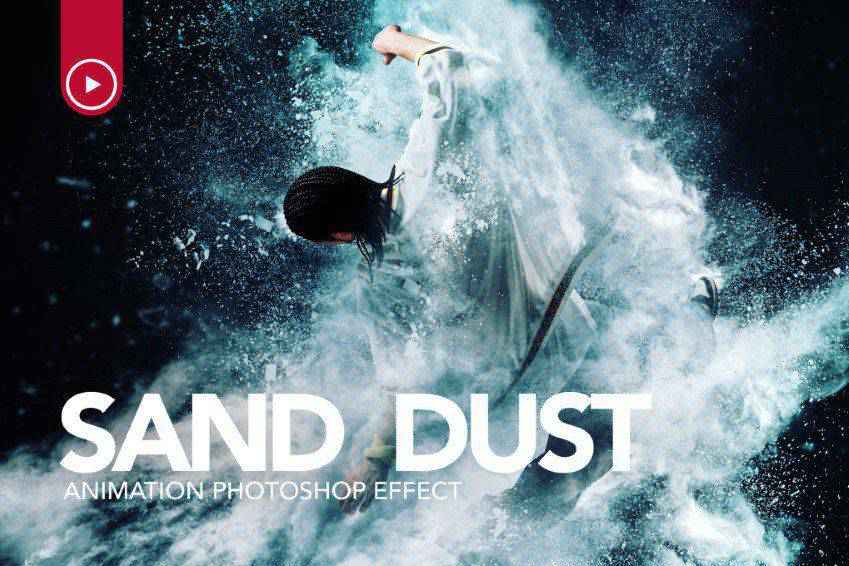 The Disturb Photoshop Photo Template creates an interesting vertical line distortion to your photos. You can use it on illustrations as well, and the action itself comes with one PSD file, six shape options, and a guide that walks you through its use. 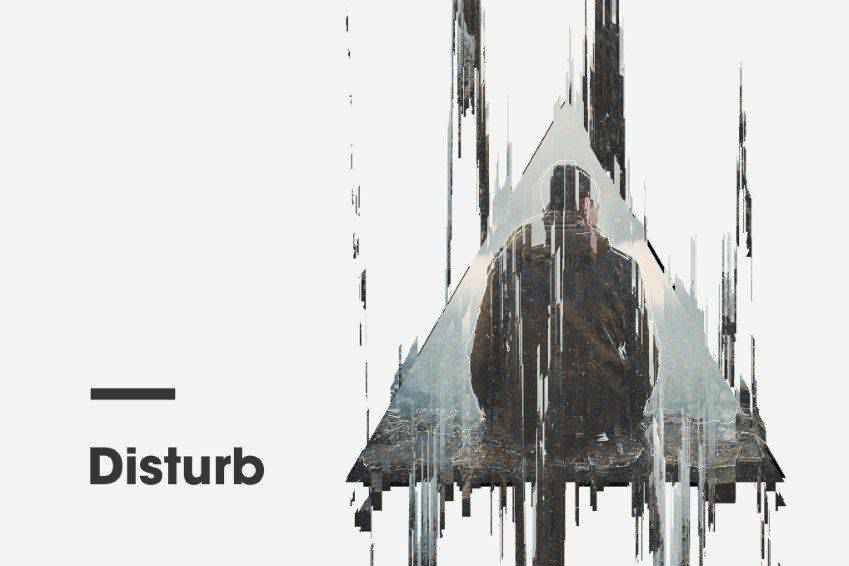 The Cortisol Photoshop Action creates a really impactful effect. Apply it to your photos with a couple of clicks and add a real sense of drama to your artwork. The actions come with an action and pattern file, illustrated tutorial, well-organized layers, color filters, etc. 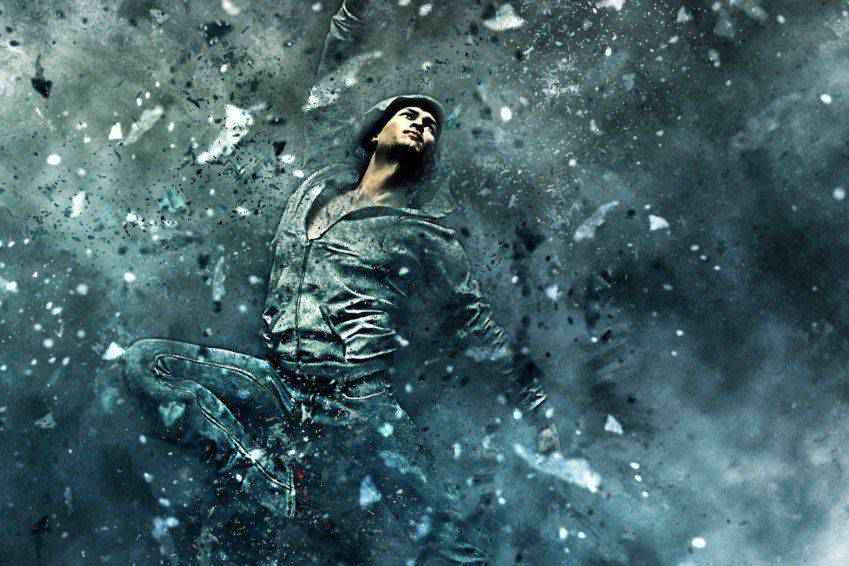 The Pixels Poster Photoshop Action is another fantastic option that makes it look like your photo has burst into pixels and geometric shapes. The action has editable layers, provides multiple colors and elements, and comes with a video tutorial to help you with getting started. 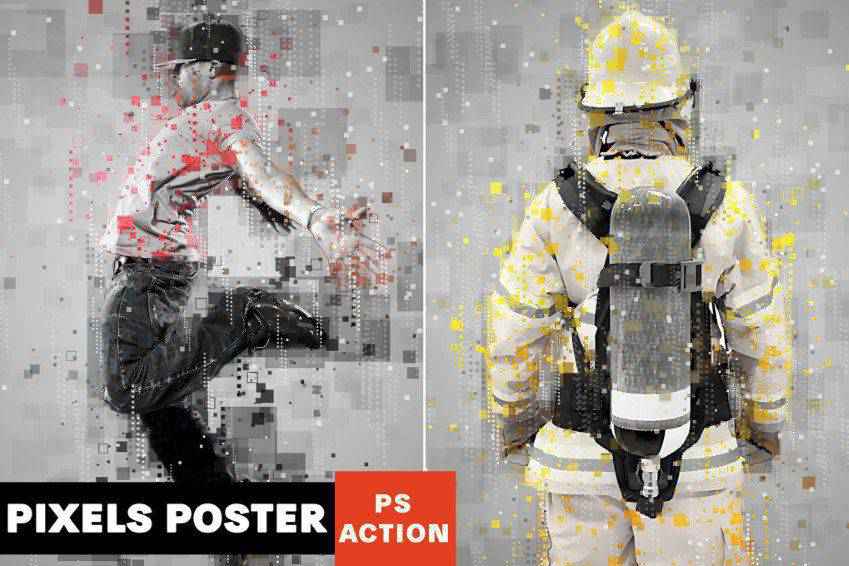 You might also want to consider the Bubblum Bubble Generator Photoshop Action. Select an area of the photo you want to disperse, then play the action. This will make t appear as though a segment of your photo is breaking apart into bubbles. Select from four directions, ten color presets, graphic elements, and more. 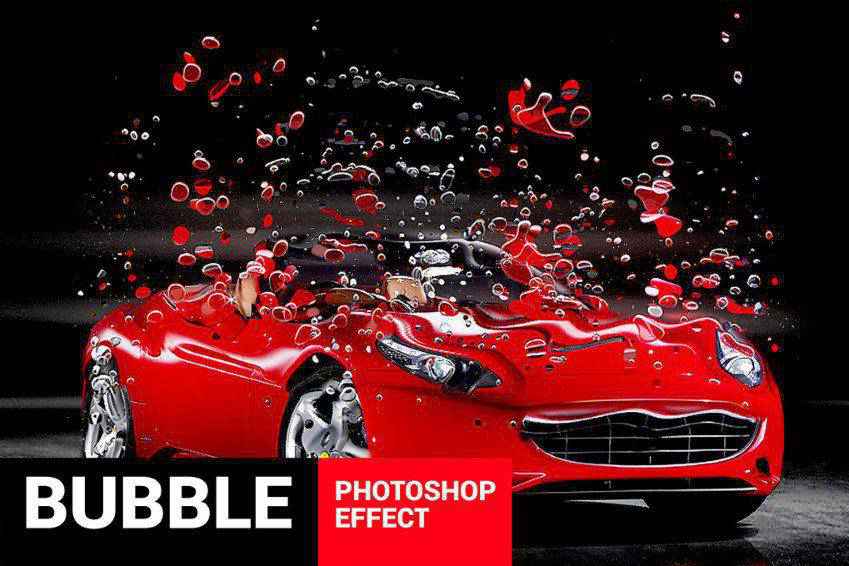 The Sandstorm Photoshop Action makes it appear as though a part of your photo has disintegrated into sand. Just apply it to where you want it to appear, click play, and you’re good to go. Pick from five directions, and you can customize layers as well. 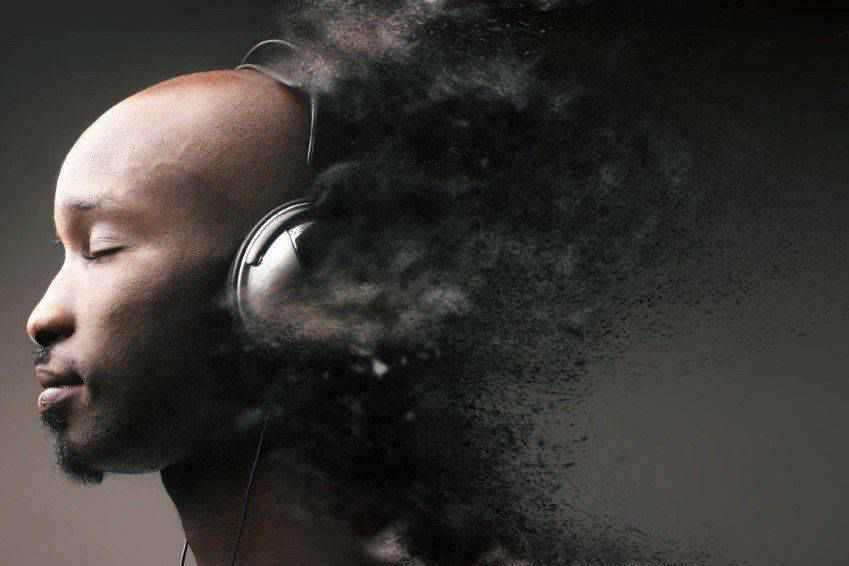 Another option is the Destrukt Photoshop Action, which makes it look like a part of your image has exploded. Select the direction you want the disbursement to go and click play. That’s it. It comes with a video and written tutorial as well. 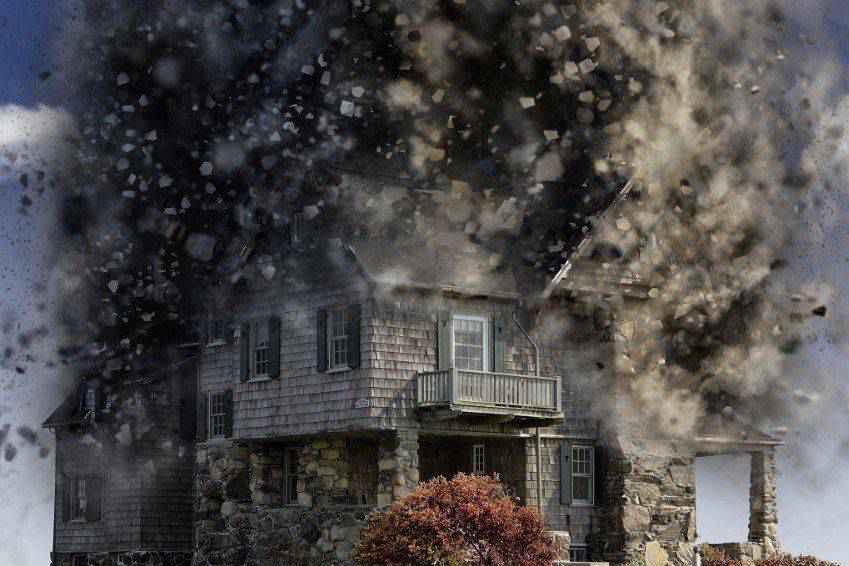 Explode & Shatter Photoshop Action is another fantastic choice. Once applied to your images, the graphics look like they’re shattering apart. It comes with an action file, brush file, pattern file, and a help file to make getting started with this action easier. 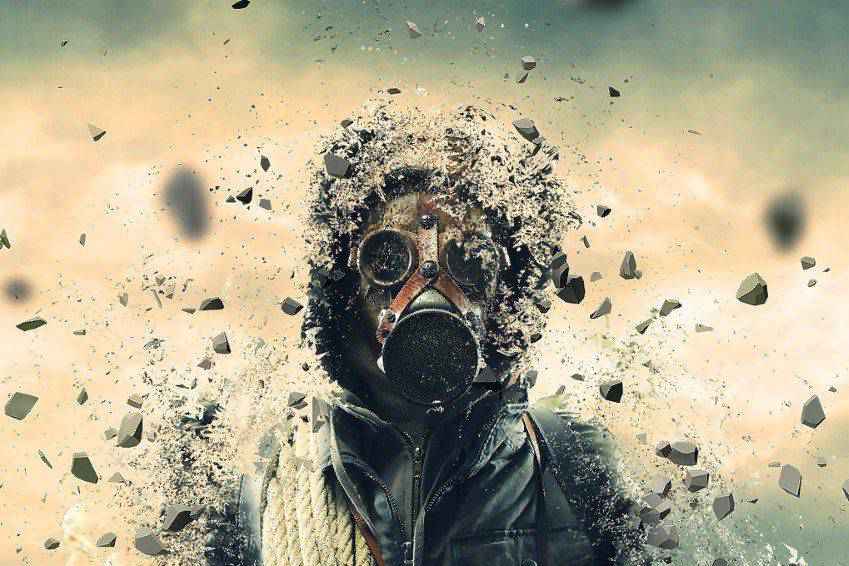 You might also want to consider the Magic Dust Photoshop Action. This one adds a sense of whimsy and playfulness to your photos. When applied, this action creates a glitter dispersion effect. The action comes with a video tutorial and a Readme file to help you in using it. 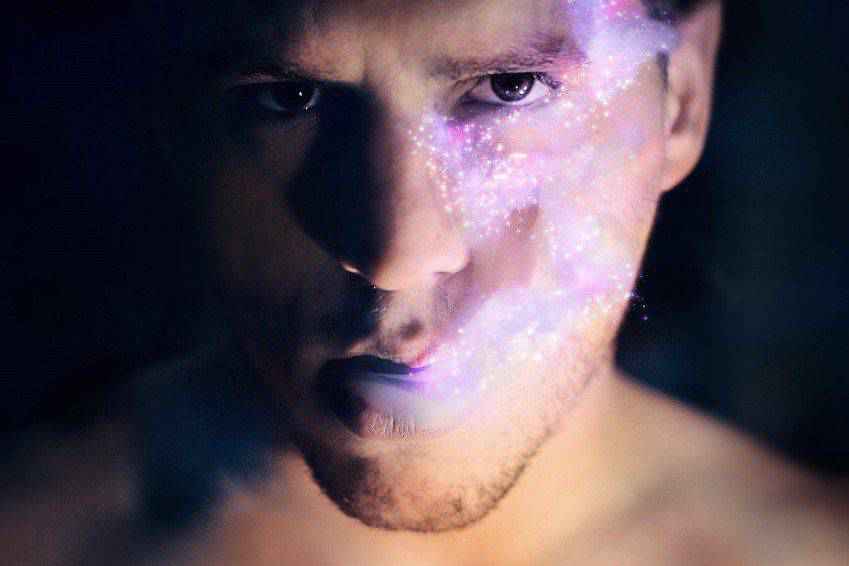 What an impact this action could make! The StarDust Photoshop Action only requires filling in your desired subject with color, selecting the effect’s direction, then clicking play. The result is a final image that appears as though it’s broken apart and left streaks of light in its wake. 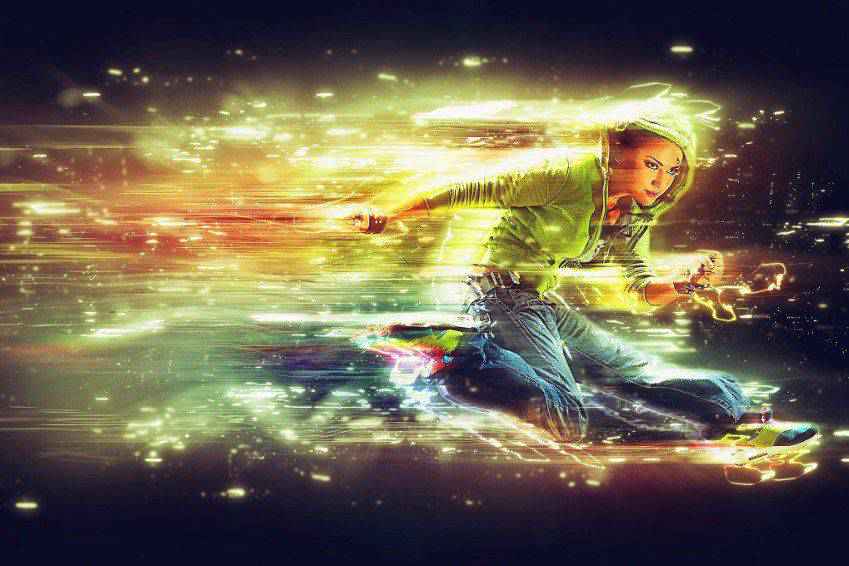 Here’s another pixelated Photoshop action that stands to make an impact on your work. Apply it to an area and play the action. The result is a photo whose subject appears to be breaking apart into pixels. It’s an excellent effect that could easily be used in various tech-focused photos. 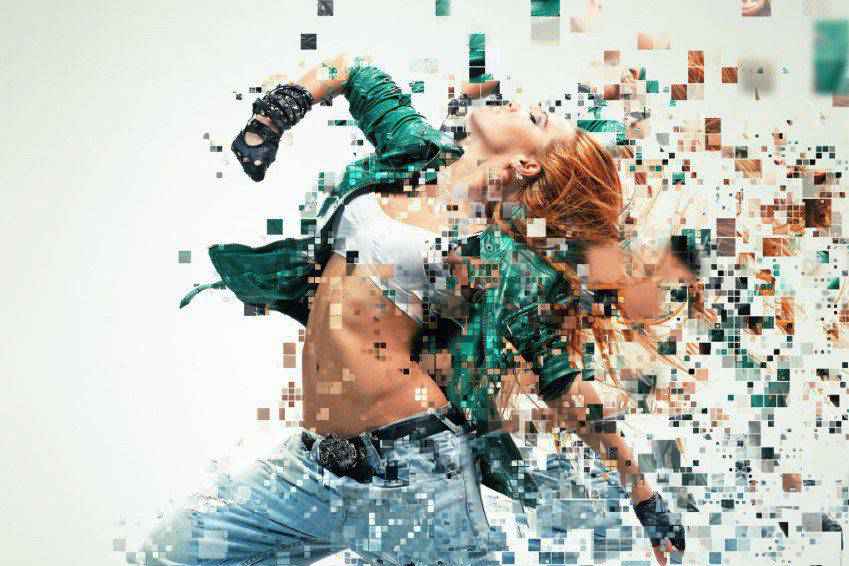 And here’s another pixelated effect Photoshop action. This one takes the effect a bit further, and as the pixels are breaking away from your photo’s subject, they get smaller and smaller. It’s a more all-encompassing effect than some of the other pixelated options on this list. 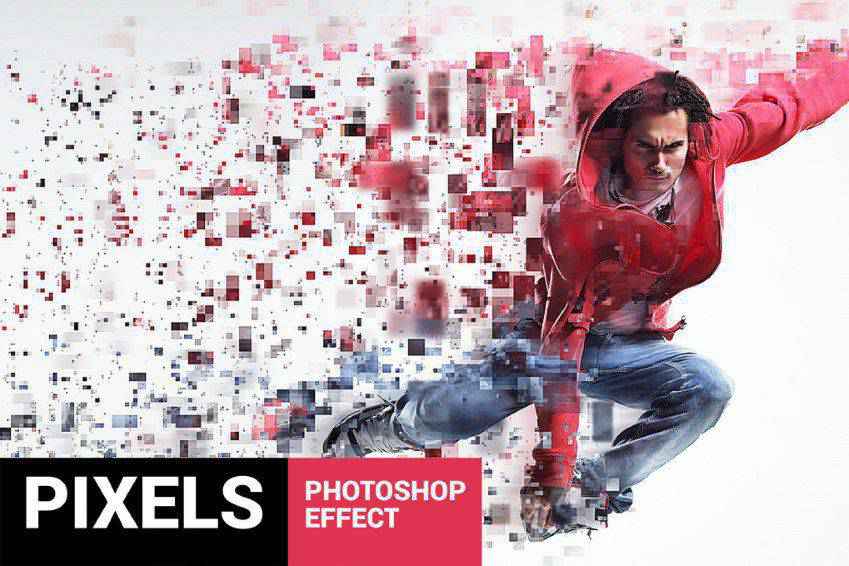 How to Install Photoshop Actions

Dispersion effects can make a bold statement in your photography. And instead of trying to figure out how to accomplish this effect on your own, it’s a much better idea to use a Photoshop action that streamlines this process.