IE6 is Finally Being Laid to Rest!!!

WOOHOO! IE6 is officially being put out of it’s misery by it’s makers Microsoft and you can help in their efforts by adding the countdown banner for IE6 clients. This really is a true red letter day in the design calendar.

Just released is the IE6 countdown site which gives stats over which countries in the world most use IE6, with China taking a massive lead. Of course the biggest problem will not be people at home using IE6 but companies like my bank that still have IE6.6 as their standard browser, or many of the corporates that I have dealt with in the past year that also demand the perfect look through IE6. 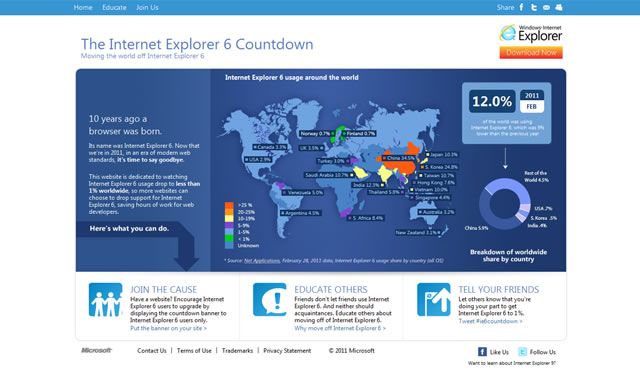 The reason that corporates decided not to upgrade is purely based on cost. Thanks to the ramping speed of roll-outs by major software houses such as Microsoft, and often failures in providing the quality wanted (such as Vista) it has become common practice within IT organizations to say “lets skip this release and wait for one that works properly”. They know that the cost of roll-out to their thousands of clients will make a major dent in their budget for the year. So, lets hope that Microsoft can get the ear of the IT manager & CFO and get them to understand that what they are using right now is disabling their workforce and not enabling it.

Either way, we should hopefully finally see a death to the 10 year old browser that has limited support for CSS and weird Javascript choices. Hopefully this will cause a knock-on effect and other products such as jQuery will no longer have to hold code choices for IE6 users.

As for you the designer or web creator, this really could not be a better day, on the IE6 countdown website there are case studies and Forrester reports on why your corporate clients should upgrade, and therefore you will not have to code with it in mind, and for your smaller customers you can share with them how cool they are to have not chosen to spend that extra money on making their website IE6 compatible, maybe remind them why they should be on IE8 (or maybe one of the other browsers available).