The burning debate between native apps and web apps that became the present-day martial epic – seemingly neverending – has finally found its end.

Fred Cavazza said “it’s complicated“. Matthew Baxter-Reynolds said that HTML5 might replace native apps. Brad Frost said “native vs web is total bullshit” and that we should “embrace the advantages of both native and web to create more holistic mobile experiences”. Cavazza added to the heat of the debate and provided an inspirational mobile strategy. Reynolds made it a little HTML5 oriented. Frost averred that this shouldn’t be a debate at all and perhaps suggested that we should move towards hybrid apps – which encompass the features of both web and native apps. All of them have solid points, I enjoyed reading them and you must go through them once as well.

This post is not about taking you a decade ahead and predicting the winner, but it’s designed to give you a good overview of native apps and web apps so that you can write your own ending to this martial epic and call off this (apparently age-old) debate – right here, right now!

Nearly half-a-billion smartphones were sold all over the world in 2011. Just past mid 2012, a million Android devices are activated per day – and 400M of them have been sold as of now. The other big player Apple has sold 410M iOS devices to date.

What’s up with apps? Nearly 1.3m mobile applications are there in the application stores of Apple and Android combined. And in an interesting infographic by ZDNet, which you can see below, it is evident that the number of Android and iOS apps downloaded will soon – and rather unbelievably – surpass that of McDonald’s burgers sold in nearly five decades. 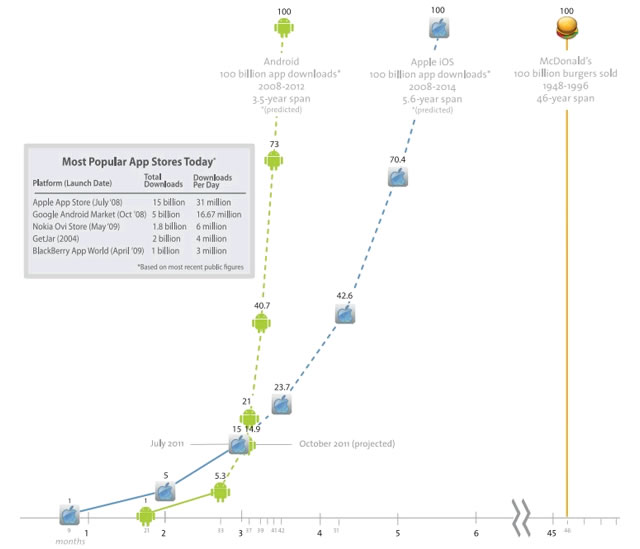 Dear basics, don’t worry, we won’t miss you out… completely!

I’m assuming that you already know the basics of native apps and web apps – that’s why I won’t go deep into them. Native apps are built using a specific programming language (like Java, Objective-C etc), which means one native app can’t run on different mobile platforms and every platform needs to have its own native app. With an ability to run without using the Internet, they can use all the features of a mobile device and also can be distributed in different application stores like Google Play etc after approval. Almost all the games you play in your smartphone are native apps.

Web apps, usually written in HTML5 and CSS3, are one-for-all apps – ie they run across all platforms. They can only partially use features of a mobile phone. They are not available in an application store, so they don’t require any approval process. Web apps can be used without being downloaded and installed in a mobile device – contrary to native apps. 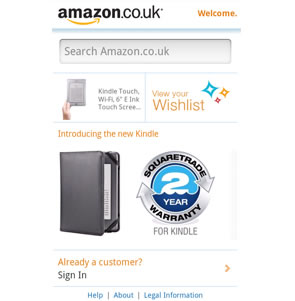 My origin is native and I’m not an underdog. 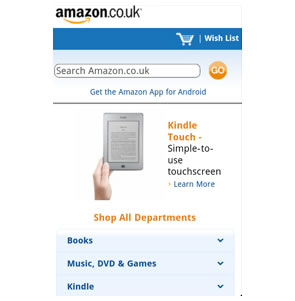 Neither am I. After all, they need us both.

Facebook perhaps agrees with what these Amazon apps are saying!

Facebook, which has always been a promoter of HTML5, recently plunged into the native app world. Yes, the social networking giant on this 23rd August announced that it has made a native app for iOS. “Building on native iOS gives us a major opportunity to keep making the app faster, more reliable and feature-rich,” said Facebook’s Jonathan Dann. Facebook’s move has proved to be a feat for native apps in the world the major part of which sees the future in web apps.

Dann, however, didn’t miss out on what all HTML5 has done for them: “By allowing us to write once and ship across multiple platforms, HTML5 has historically allowed us to keep the Facebook mobile experience current and widely available, and has been instrumental in getting us to where we are today.” HTML5 gave Facebook that “breadth” and the social networking giant now is striving for that “depth” through its newly-launched native app.

Now, if we talk about the cost that goes into the development of web apps and native apps, their story is like that of responsive website and separate mobile website, where the former, like web apps, can be made at relatively cheaper cost. Those for whom cost is the ultimate decision maker should go with web apps only, as they’ll not only cost less but will perform on all platforms, stretching the reach of the app.

Speed: How much does it matter to your app?

App developers have always maintained that native apps are faster and more reliable than web apps – the reason behind Facebook’s recent move. But it depends upon the nature of your app – whether or not it requires that speed. And since speed has a huge impact on user experience, it can overshadow all cost factors. So, if you desire something what Facebook did, you should go for a native app – and you can happily choose the platforms you want to develop it for.

Finally, the endings of the martial epic can be the following and many more: the truce between web apps and native apps as we need them both somewhere down the line; the move towards getting the best of both by choosing hybrid apps… It would be great if you share how you would like to end this epic in the comments section below.