Collaboration Between Designers and Copywriters

Once upon a time, the assembly line revolutionized productivity. Instead of one worker or a small team performing all the steps to create a product, each person specialized in one task, did their job and sent the work down the line for the next person to do their part. The assembly line was a great invention – for manufacturing.

Though the assembly line is advantageous for making things like automobiles and computers, some endeavors suffer when tasks are compartmentalized. Some processes are simply more effective when the effort is collaborative. One such practice is creating really good design work.

Too often, the person with the idea meets with the designer. Then when the design is complete, it’s sent to a copywriter who must put together words that compliment it. The work is sent back through the process several times for changes before it’s finally approved.

While this creative assembly line approach is capable of producing results, the strongest work is accomplished when the exchange of ideas takes place at the beginning of the project and at intervals throughout its completion.

There could be a scientific reason for why design is stronger when designers and copywriters work together. Design work utilizes the right hemisphere of the brain, the side believed to be responsible for creative thinking, interpreting colors, recognizing images, and expressing emotions. Writing incorporates the left side of the brain, responsible for language, logic and critical thinking. 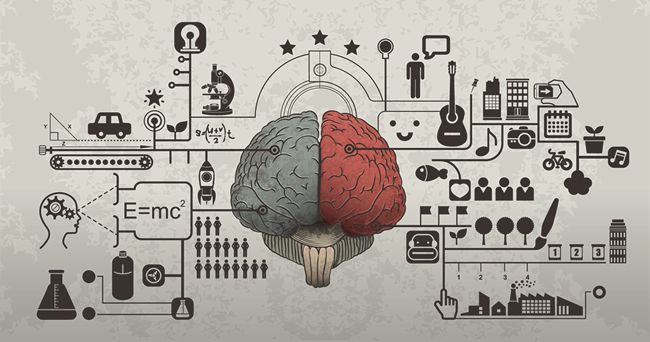 When the designer and copywriter work together, the potential for a successful final product is maximized.

When you think about it, the jobs of copywriters and designers are very similar. They are both masters of their crafts. They express complex concepts and ideas in bite-sized bits that convey meaning in a moment. The fact that one does all this with words while the other accomplishes it with images isn’t important: They are kindred, creative spirits that can amplify their abilities when they work together.

“One of the problems with being a creative is that we love to have all the ideas and claim credit for them, especially if they are awesome ideas. But in my experience, the best ideas don’t come from working in a silo,” said Michele Kamenar, dialogue artist at The Lucid Word.

“A good art director or copywriter can magnify the power of their ideas by overlapping their skill sets with the skill sets of the other. To pit them against each other totally misses the point and can even compromise the strength of the idea they are trying to pitch.”

That’s not to say that it’s always easy for copywriters and designers to work together. Artists and writers often like to work alone. This way, we can get things “just so” but it can also make us vulnerable. Having someone else to work with is like having a partner to back you up.

“Working in step along with them allows for valuable collaboration in the initial stages of the project,” said Abbey Fitzgerald, a web designer at Smartpress.com. “Questions, ideas, and strategies are discussed early in the process, which helps to find possible issues sooner rather than later. This helps to eliminate last minute design changes or finding that there is missing content that needs to be addressed.”

So how do you make sure you get the most out of your designer-copywriter partnerships? The following advice cuts both directions. Great copywriter-designer teams use the following tactics to create stronger design work, together.

At first glance, it might seem that the assembly line approach would be great for all manner of projects, but that’s just not the case. In creative work, collaboration and teamwork is the key to success.

When we work together, we can become greater than the sum of our expertise and foster an environment where exceptional ideas take flight.