You see them every time you go to the supermarket. Chances are, you’ve used one recently. Shopping carts have been a matter of course for supermarkets, grocery stores, and many retail outlets for decades, but did you know that Sylvan Goldman, their inventor, struggled with some of the same problems you face as a designer?

We’re going to explore the history of the humble shopping cart, taking lessons from its design, marketing, and even the psychology of use, that you can start applying to your design process today.

A couple of ordinary folding chairs were the inspiration that spawned the early prototypes of today’s shopping cart. This was an invention that helped revolutionize the retail grocery business. But it wasn’t perfect at first. Sylvan Goldman and his associate revised the design of the shopping cart many times before it began to resemble the modern cart we know today.

They had to work through safety issues – the little space for children was developed after observing how mothers would put their children in the early carts, which was dangerous and which also left little room for their groceries (and thus defeated the entire purpose of using the cart in the first place). 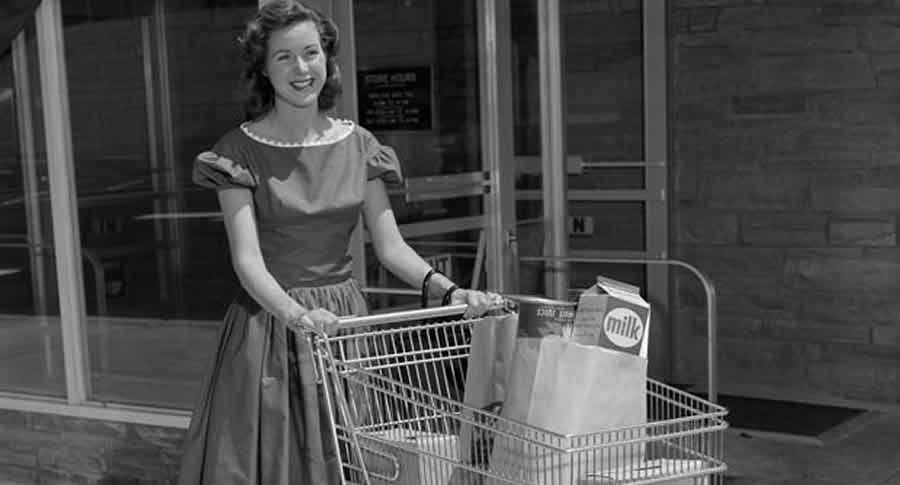 Many designers often rely on the first or second idea that comes to them, which may get the job done and be “good enough” for the client, but it’s terrible for fostering true innovation and creativity.

Challenge yourself to be your own worst critic for each job you take on. Begin training yourself to look for areas you can improve on and ideas that could be developed further, and you’ll start to see glaring errors you wouldn’t have noticed before. 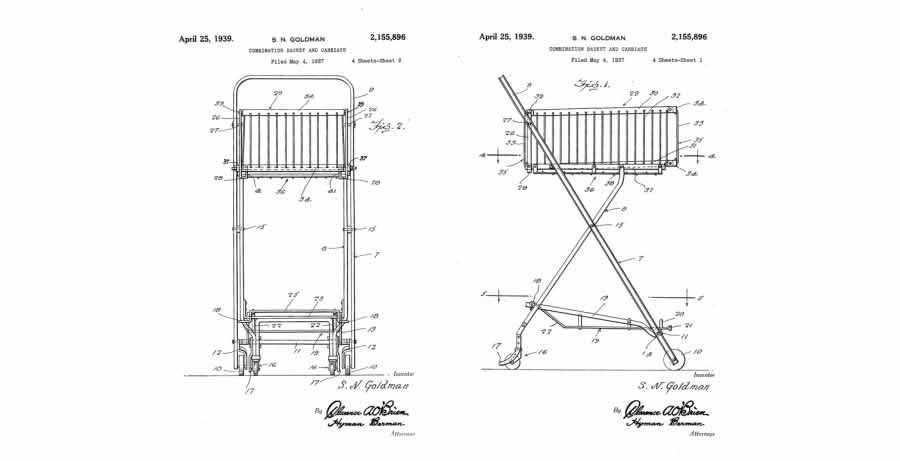 Nowadays, shoppers are most likely to complain about inefficient steering on their shopping carts, making it nearly impossible to turn corners or pivot to avoid other shoppers or freestanding food displays. But back in the 1930s, grocery store owners were very interested by the small amount of space Goldman’s new shopping carts took up.

Before Goldman’s invention, people placed their groceries in heavy, bulky baskets made out of wicker or wire. Once filled up with groceries, they got so heavy and cumbersome that store clerks would approach struggling shoppers and provide them with a new, empty basket, taking their full basket to the check stand for them.

These baskets took up a lot of room in the stores as well, so Goldman’s upright, foldable carts were a very welcome boon to store owners.

As a designer, it’s always important to consider the selling points of your designs, not just to your clients, but also to your client’s eventual users, audience, or consumers. The shopping cart solved a problem both for the store owners (took up less space) and for customers (were less heavy and cumbersome).

If you make your client happy, that’s a good thing. They will pay you and send you on your merry way. But if your design fails to make your client’s users happy, your client will be calling you back, possibly demanding a refund.

Goldman experienced exactly this phenomenon firsthand when his client (the grocery store) attempted to sell their customers on the idea of the shopping cart. 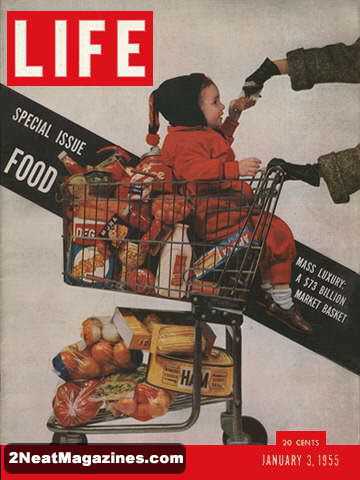 Believe it or not, Goldman and his associate had the most difficulty not with developing the shopping cart model itself, nor with perfecting its functionality. The biggest problem they faced was in getting store shoppers to actually use them.

Female shoppers of the day thought they too closely resembled baby carriages – they refused to push yet another cart on wheels and add to their daily drudgery.

And male shoppers were too macho to use a dainty little cart on wheels when they could just use their “big strong arms” to carry around one of the old-fashioned baskets. Who knew shopping carts weren’t considered manly in the early 20th century?

The only users who actually liked the idea of shopping carts at first were older people. Not good.

So, how did Goldman get around this marketing obstacle? If you guessed ‘use plants to manipulate shoppers into using the new carts via peer pressure,’ give yourself a prize!

Goldman hired several “pretend” shoppers of various age groups to use the carts in the store. He then proceeded to suggest to real shoppers that “everyone” was using the new carts, which created a social imperative to fit in.

Almost instantly, the new shopping carts were a hit – everyone began using them within a few weeks. 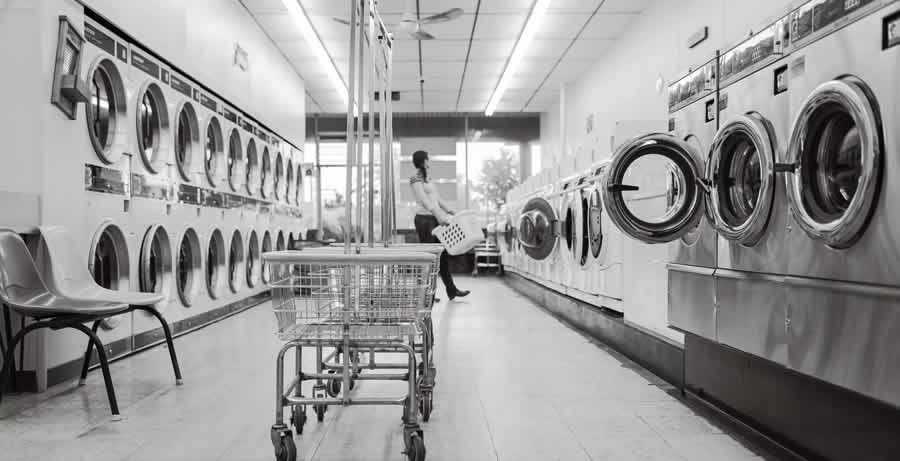 Is it unethical to persuade your target market to consume your products or information by appealing to their need for social acceptance? Absolutely not. Companies, as well as everyday people, do it all the time.

When you and your friends are deciding where to go out to dinner, and one friend is holding everyone up by not making a decision, what’s the first thing you do?

If you’re anything like me and my friends, you’ll appeal to the “majority rule” and try to persuade your friend to choose what everyone else has chosen. This is exactly how companies have persuaded people to have televisions in every room of their house, or purchase hideously ugly shoes that no sane individual would ever spend their hard-earned money on.

The power of social persuasion is nearly limitless, and as a designer, you should definitely be using it to your advantage whenever appropriate. If you have to resort to an obvious persuasive tactic or two, that means you’re using your power as a creative professional to sway public opinion and generate profits for your client.

Either that, or you’re just a big jerk. Who knows, really?

First came the “folding basket carrier,” the initial prototype for the shopping cart perfected by Goldman and his people. After ten years of successfully marketing this cart to stores, there came the “nest cart,” which included the new mechanism of being able to nest itself inside the next cart in front of it.

This mechanism should be familiar to you if you’ve seen those long lines of “nesting” carts at cart kiosks or drop-offs.

Shopping carts have gone through many, many changes over the years. You may have been grateful for the shelf underneath your cart, which allow you to select heavy objects without having to lift them too high, or irritated at the security measures stores have taken in recent years to prevent theft (the carts in my neighborhood store automatically lock down the wheels of any cart that wasn’t cleared by the system, which has taken me by surprise more than once).

Sylvan Goldman died in 1984, but his innovations have lived on in the imaginations of countless product designers, and there are now more versions of the shopping cart than even he lived to see.

Just because you finish a design job with one client, that doesn’t mean the research and testing you conducted for that project has no further use. If you work to narrow down your focus to a particular market or two, you can collect research data from each future job you take on, accumulating a database of knowledge and experience which will allow you to innovate faster and more efficiently with each passing year.

In a couple of years, you’ll have far surpassed those designers who ignore the goldmine of business, marketing, and psychological insight they have at their fingertips through their clients and their clients’ users.