What to Do When Your Graphic Design Client is Andy Pipkin

Andy Pipkin tells his poor duped friend Lou that he wants tickets to the opera for his birthday. Its an unusual request, as Andy has been seen to have a bit of a love affair with action movies most nights, but after a short debate Lou gives in. A lot of effort later and the show is starting. Its everything Andy asked for, Lou is a proud man, the anticipation of the audience rises for that very first line as the curtain drops and the actors move into place and then out of the silence comes a lone, carrying voice:

‘I DON’T like it’ – Andy Pipkin, An Opera Theatre, Somewhere in Britain

Sound familiar? Its your graphic design client. The one that won’t stop demanding you create the impossible 3D shape to their exact specifications and then decides that actually, they’ve discovered a neat little font called TrebuchetMS which they think will do the job better if you’d just use it.

The following tongue in cheek article is a guide of how to survive when your graphic design client is being Andy from Little Britain. And let’s be honest, in our eyes, they’re all Andies. 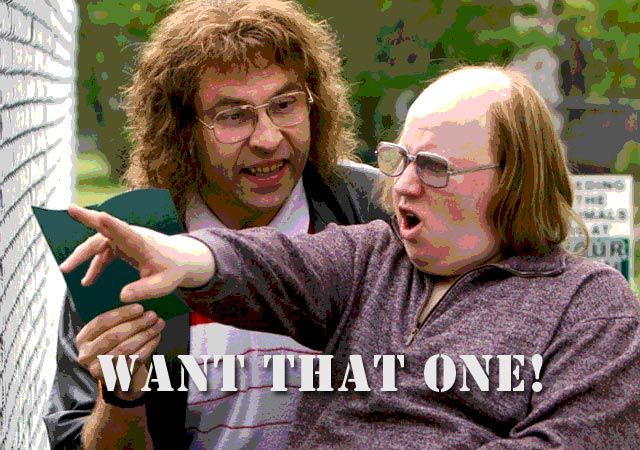 Like Lou, you’re probably an incredibly patient, kind, sociable person that only wants the best for those around them (ahem!). But consider for a second that Lou, beloved as he is, is an enabler, and there’s nothing worse than being an enabler when you’ve got an Andy on your soft, manual-labor repelling, designer’s hands (wink wink, I’ve won awards for mine)!

Let the Andy know you’re Awesome at this

Yes, I know, they’re being a massive baby.

You’ve tried explaining everything at its most simple, and without overcomplicating things, just like Lou does. You say things like ‘are you sure this is the route you want to take forward?’ and ‘I don’t think this is the optimum solution…’. Well here’s the difference between you and the timeless fictional character Lou Todd. Lou is not an expert in his field, you are.

The thing about the Andies is that despite all the obvious signs, they haven’t yet worked out that you know what you’re talking about. Time to tell them, ‘straight up’.

Ever heard a doctor say, ‘Well I was thinking a simple injection would do but if you’re sure you want it then we’ll do a triple bypass, what the hell, I need the practice!’? Nope! You are the doctor in this situation, you are the expert, they just need to realise that.

Be concise, be firm, set out the plan of action. Scrap out the parts of your e-mail which state ‘I believe’ and substitute it for ‘In my years experience’. Get rid of ‘maybe’ and put ‘definitely’. Be strong with your views. The type of person who changes their mind quickly, your Andy, is most likely rather easy to influence. Make sure your voice stands out above the crowd by using an authoritative tone even if its not in your nature – you know that you’re the professional, the best way to put it across is by taking the lead with your tone.

This strategy won’t win you every battle. It might not even win you the first one because Andy’s friend Gary’s son, who lives down the road from Andy is studying graphic design at A-level and he’s been told that a logo that blinks every 3 seconds is the way to go. Plus Andy’s local butcher agrees with Garys son so your stuffed, that’s two-to-one. Note: your Andy is a ‘Parrot’ and therefore needs social recognition (see previous website design with DISC ANALYSIS article for a more serious short explanation!).

Send in the celebrities

It seems everytime Andy asks for something new and ridiculous, Lou, the Enabler, tries to persuade Andy against it with his only weapon, logic. In normal situations, its a great tactic, but Andies don’t care for logic, they just wan’t to know what Bieber would do on his logo. (answers in the comments section)

Logic is usually my weapon of choice, and probably yours too. But in this situation logic is a blunted blade…that’s rusty…has no handle…and Lady Gaga dressed it this morning.

Here’s a better weapon – your other clients.

Without reading my previous article you’re just going to have to trust me on this one. Andies need social confirmation. Back up your points with socially commendable examples. Or ask them to name a few companies that they like, then discuss their logos. I can guarantee they won’t be flashing. Say something along the lines of ‘we should be aiming for the crisp and clear style that you see in the logos of the latest big brands. Iconic but simple, like Apple.’ follow any sentence with ‘like Apple’ and they’ll be putty in your hands.

– (For all you Andies out there: Send all your money to <insert business name> and get a great logo, like Apple’. Sorted.) 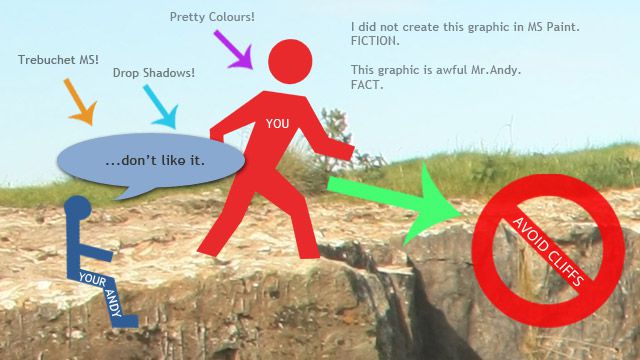 The truth is you just wan’t to get this project done and out of the way so you don’t have to deal with your very own little Andy for even one more day. Plus your a designer, once you get a project and you like to get it done, properly, and then its on to the next project, right?

I get it, I really do, but counter-intuitive as it may sound, when you’ve got an Andy on your books its time to go as slow as possible. Take three times as long to start the graphic design project, take the normal amount of time to complete the work.

The reason is that Dave, the Saturday guy at Andy’s local Pet Store, thinks that ‘blinking’ logos are a thing of the past (yay Dave!), he’s told Andy to get a logo with moving parts instead (I hate you Dave). So two days after he puts the order in for a blinking logo, Andy sends you an email saying ‘want that one now’…*shows you a .gif file on an old Geocities website that Dave owns*. Point being that if you already started the job, or even finished it, this is going to be more frustrating that it needs to be. Give your Andy some time to change his mind before you even get started. Half the time, it’ll save you from certain psychological damage. The other half of the time it’ll give you a chance to find Dave and ask him for a pet with more than four legs that sleeps all day but has funny ears (we’re coming for you Dave).

Switch them onto an Hourly Contract

The fixed contract might benefit you usually. It might even be your pull to the client – get a logo with us at £X only. But the thing about Andies is that more often than not they know they’re an Andy. They probably apologise once every eye-burning email they send, tell you that they’re not ‘technologically gifted’ and that its going to be a ‘long process’.

Chances are, they’ve factored their own difficulties into the cost of the project, so don’t be afraid of stating the switch clearly to them, they’re expecting it. Charge at obvious intervals.

Once you’ve explained that you’ve moved them on to an hourly contract you can sit back and relax for a second. Your going to do this in your own time, will be paid amply for said time, and some of the odd things they wan’t will remind you of the last time you did them, back in the 90s, when all the best music was around…

Step 3: Accept them. You’re Gonna Hate Me but Andy is your Best Client

Or at least he/she will be if you follow the above advice. Unlike poor Lou, you’re getting paid to come up with the wrong design time after time after time. If you need the business and come at it with the right strategy, Andy is a cheeky little gold mine. And he’ll love you all the more for your assistance. Just don’t agree to go to the pub with Andy, or play at the same local Badminton club. Because next minute you’ll be looking after his/her old featherless Budgie and taking out anger management classes while he’s on a cruise to Hawaii. I don’t even like budgies.

Humorous alternatives to your Andy infestation

Alternatively, if you didn’t stumble upon this article until you already flew over the Cuckoo’s nest, fell, broke the nest and chose the life of a hermit instead, you can also try one of the following ‘after-the-event’ solutions.