Are Newsletters On Their Way Out?

Where I work we send out newsletters once a month and are just beginning to review all our digital and traditional communication channels. For me, I felt that newsletters are no longer the most viable option for communicating with our online audience. However, to persuade a team of opinionated individuals I needed more than just my own opinion, I needed, and wanted, to find facts, statistics and reasons why other forms of online communication would be more suited to our, and our audiences’, needs.

I really struggled to find anything outside of marketing spiel to support my opinion that newsletters should be scrapped. Not a great start when you are trying to find unequivocal(if such a thing exists) proof that we should no longer send out monthly email news. So to that end, I thought I needed to come up with my own list of reasons against, and for, newsletters in order to form a valid opinion that could potentially sway even the most stubborn individual.

Like me, and many others, you might, primarily use a table-based design when creating an email-out. (If you are, then you should take a look at our collection of responsive newsletter templates). Like me, it probably grates on you that in 2012 we are still having to design this way for email clients. I have to work with a table-based layout and a mailing manager (GraphicMail) which adds a lot of unnecessary code to an email. While browsers (and developers) are moving more and more towards responsive design, are email clients and mailing managers?

This is one area that I was really hoping to find conclusive proof against newsletters. However I couldn’t find a definitive answer. A quick Google (a girl’s best friend) showed that MailChimp is allowing for media queries so at least a good designer/developer can include these in their template to ensure a design that responds to whatever device a person is viewing the email on. However, the email client itself does need to allow media queries to ensure the correct display. 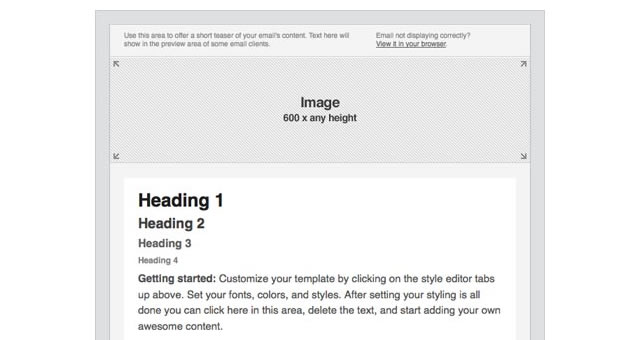 While there aren’t definitive facts on what email clients support media queries, and unfortunately we don’t use MailChimp at work so this isn’t an option for me, we do know that mobile use for browsing and email is on the rise. Having a table-based layout means a lot of scrolling on a smaller phone, even up to a tablet, the e-newsletter might not display as expected impacting on the user experience for the audience. For me, I think this is where the rise of other online communication wins and provides a compelling argument for why newsletters should be put on the digital scrapheap.

The Rise of Social Media

Since April last year, when we launched our social media presence (primarily on Twitter), we’ve increased the rate of our online followers which far surpass the rise in our mailing list, which has remained fairly static since the list was created in 2007. While we’re not in Stephen Fry figures yet, our followers are growing by approximately six followers per day. We’re also looking to embed Twitter across all our channels but already the widget sits on our website, meaning that our audience don’t have to be on Twitter to see that we are tweeting.

Using Twitter and other forms of social media allow our audience to engage in two-way communication with us and have more choice, not only in following or unfollowing but also choosing when to look at what we are tweeting, which we can aid through the use of hashtags. Or mailing list, which is getting a bit old, potentially has contacts that aren’t up to date and has email addresses from people that have now moved job and have forgotten to manage their subscription, something, which for me, is an advantage of social media as it is easier for you to manage.

From a practical point of view, there are also many applications that help us to manage our social media more efficiently, and effectively, than a mailing manager. We can schedule tweets, analyse our followers and also work out the best way to tweet and when. While there are some statistics through GraphicMail they don’t go into as much detail and the mailing manager doesn’t allow for as much embedding of communication as Twitter, Facebook, LinkedIn and Google+ do.

One of the advantages of a newsletter (perhaps the only advantage) is that you can target, or tailor, your content to your audience. Doing this effectively can be a challenge but if you decide whether you are informing, selling or promoting you can create your content, targeted to your audience, with a clear purpose and reason for them to click-through.

However, with the rise of sites such as GroupOn, voucher code sites and even Twitter, do some of the email-outs that are selling me an advantage of being a ‘loyal customer’ fall by the wayside? But then, what other method, if you are a smaller retailer, do you have to reward loyalty online? Is Twitter the best option?

Working with newsletters that mainly act as an aggregator, our own news is roughly a third of the content, would RSS feeds be more beneficial on our website? Or potentially a very basic, less regular, email-out which included the latest feeds? I would argue that our content needs reviewing first but if I can’t convince that the content isn’t up to scratch, I have to approach it from the benefits of other technologies.

Which way are the odds stacked?

Personally, I was hoping to find a decisive factor in why email-outs are no longer viable. An irrefutable piece of evidence that I could take to my boss and say ‘look they have had their day, let’s get rid!’.

Unfortunately the answer doesn’t appear to be as clear-cut as all that, relating it to my personal circumstances, I don’t think I can sway my boss with any argument to stop an email-out altogether. However persuading a rethink on how our content is presented, and what content we present, might be achievable, especially when we can see the success of our social media and also look out to the success of sites such as GroupOn.

I still have my doubts as to whether email-outs have had their day, not least as I end up deleting half a dozen of these emails each day (I really should make the effort to unsubscribe!), for me social media is the most likely replacement, I can find content I need, be rewarded as a loyal customer/follower and easily engage in communication.

I’d be really interested in hearing other thoughts on the subject, anyone who has had to create an nesletter using a table, has to have an opinion?!