Why Is This Here? Why You See Weird Prices Online

Pricing isn’t an art anymore. It’s a science with some well-documented and researched principles on how people think and compare when offered multiple options. Here’s the good news: although pricing has become a science, it certainly isn’t rocket science! It’s actually quite easy to learn. And one of the most important principles to help you learn pricing is learning about decoys, or the “why is this here?” effect, a phrase contained by me (smart face).

A Brainy Company Has Some Brainy Pricing

Meet Lumosity, a company focused on “improving your brain”, which raised some serious money to develop their product. Since their business model is focused around selling a subscription for playing the games, getting the pricing right is crucial.

Here is the Lumosity pricing model:

Here’s a question for you: Out of the 4 options above, which one are users most likely to purchase?

The second one seems to be clearly the winner. Lumosity even highlighted that option by marking it as the “most popular”. But why is this the most popular choice? One reason only: context.

Why Is the First Option Even There?

If there has to be a least popular option out of those 4, I would guess it’s the first. The first option serves its purpose of making the second option as popular as it is now.

Lumosity has used the first choice as a point of comparison to help increase the sales of their “most popular” package. What do you think users would have chosen when they looked at those two pricing tiers at the same time (assuming people were interested in purchasing)?

“I could get the first one, but geez, the second one is twice, almost three times as cheap.” The first option is clearly the worst and the second is clearly much better than the first one. If you do the math, you have $72 vs. $15, which means that if you continue with the monthly payment, when you reach your 5th month you would have paid $75, more than if you chose an annual subscription right now.

My immediate reaction when I saw an option like the first one was: Why is this option even there in the first place?

Now, of course in this example it would be weird if they didn’t provide a monthly subscription, so a better question to ask is: why does this option have this price in the first place?

The below picture shows the study results of participants who were asked to choose between two subscription options for the Economist. 68% chose option 1 and 32% chose option two. 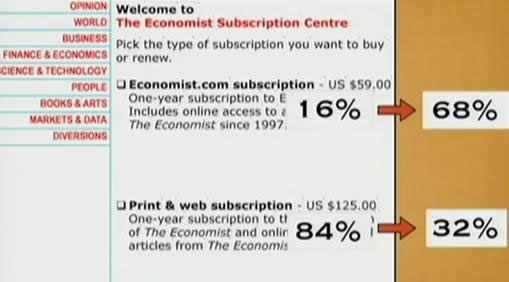 Now, what would cause this preference to radically shift to the point where only 16% would choose the first one and 84% the second option? This:

Now, why the heck would anyone choose the second option? Why is it even there? Clearly most people saw that the second option was definitely the worst choice and, in practice, 0% chose it. But what happened as a result of it is a radical shift between the first and the third choice, as you can see from the percentage points on the previous picture (68% > 16% and 32% > 84%).

As you can see, adding such an irrational choice had really rational results.

Notice the third “small” option which costs $49 a month. Most people chose the “middle” option, resulting in 47% click through rate. But let’s focus on the ‘small’ option for now which was later tweaked. See the picture below:

Notice the subtle difference in pricing? Everything is the same, except now the ‘small’ option costs $79 instead of $49.

This was a deliberate attempt by Usabilla to “nudge” visitors into clicking on the second option, and it did work (47% vs. 58%).

In the pricing plan above, many people probably asked themselves: “Why is this small option even there? It’s a no brainer choice that for $10 more I can get 3 times more active tests and have twice the participants. Duh!”

Getting the pricing right can have a profound impact on your conversion rate and click through rate, as we’ve seen from the three examples above.

The next section will focus on how you can use the “why is this even here” effect to your advantage. One thing before we get to that though…

One Caveat: Make Sure Each Option Has Its Price!

Psychological research (read Dan Ariely and his best-selling book Predictably Irrational) has shown that the “pain” from getting something for FREE and getting it for, say, $1, is much greater than the pain of going from $1 to $2. Many people will simply ignore your paid options if you offer a free one.

It’s ultimately up to you to decide whether you want to include a free package, be aware, however, than many people will simply choose the free package without even evaluating the paid ones. That’s why I think it’s best to put a price point, even if it’s $0.01, so that uesers don’t have to go from “totally free” to “paid”.

Do You Have The “Why Is This Here” Pricing Effect In Your Product/Service?

The ultimate goal of adding an “irrational” package to your product is to help you boost sales. Here are a few examples of how you could implement this:

You can even make the first option more “irrational” by charging $70 per hour and $105-120 for 3 hours! Now this is a no-brainer. Be your own scientist and tester, try both of the options on a sample of your potential clients and see which one works best.

Example #2:
Say you’re selling your own themes and have a price for each theme. Why not take your best-selling theme and add different ‘packages’ for it? Let’s suppose you’re selling all of the themes for $39 and want more people to purchase it. From previous purchases, you’ve determined that most people will stay with one specific theme after buying it. Why not offer a bundle option where for each of your other themes purchased, people can buy your most popular theme for 50% off? You can feature this immediately after people purchase on the thank you page.

Or you can simply add a “downgraded version” of your template for a ridiculously expensive price. For example, you can sell a license for using the themes on only one site for $25 while for $39 they can use it on unlimited sites. You get the idea, for only a small upgrade price they can go from 1 to unlimited!

The key point is: Be prepared to add an option that (almost) nobody will buy. The sole purpose of that option will be to serve as an anchor to “nudge” people to go to your preferred package.

Example #3:
Let’s suppose you’re selling an icon pack for $15. The way to sell different packages is to deliberately ‘downgrade’ your product. A brilliant article written way back in 1998 in the Harvard Business Review introduced a concept called “versioning”. The author predicted that the economy for selling digital goods would be quite different than selling physical goods.

Unlike physical goods, where manufacturers spend hundreds of hours trying to make something better and to sell a better package, with software developers and web designers it’s often a different story. They sometimes produce their best option at first and deliberately downgrade their product to offer a ‘lite’ version as part of their package. Think of it as the lite version vs. the full version, where they only offer limited features in the lite version.

In the icons example, you can sell your original pack as “high resolution” icons and sell a lower-resolution alternative for a comparison. You can also make the price so that the high-resolution package is the obvious choice, selling the low-res for $12 and the high-res for $15.

Do you have your own ideas on how to implement this in your business? Be generous and share them with your follow designers in the comment section! It’s time for brainstorming.