How to Best Employ Taxonomies within WordPress

For years, WordPress website owners have stressed over how to properly implement taxonomies within the software; that’s because WordPress includes support for categories, custom fields, and tags, and all of these classification methods are both utilized and encouraged. Even more advanced WordPress users are not sure how to best employ these methods of tagging posts with relevant information, and they’ve largely stuck to categories as the primary way of filing new content into relevant containers.

While there’s certainly nothing wrong with using categories alone, it’s really not the most efficient or intuitive way to use taxonomies for post classification and containment. Instead, using custom fields and WordPress post tags presents a better way to separate content into smaller, more relevant niches.

In order to do this properly, however, it’s necessary to understand what the difference is between a category, a tag, and a custom field. Indeed, a view from above makes them look all rather similar. They all group and tag things, they all separate posts for viewing on the website, and they all must be relevant to a post’s content. While those things are true, there are issues of nuance that split these popular forms of taxonomy into completely different usage scenarios.

First: It’s Time to Understand What a Category is Intended to Do

The category is the longest-lasting taxonomy method for WordPress installations, having been introduced virtually with the first version nearly a decade ago. It has survived a number of usability and relevance tests, most notably when WordPress included the “tags” feature and encouraged its use in many applications. Categories are intended not as very specific post containers or tags, but instead as broad classifications of what a post is really about. For example, a post that reviews one or more albums would be classified as “Music” or “Album Reviews,” but it would not be classified as the artists whose albums are being reviewed. The job of a category is not to get that specific.

The best analogy for a category in the real world would be a typical file located in an office environment. That file belongs to just one customer but, inside that file, a number of disparate documents are contained. The documents are all related to the customer, but they might not all have the exact same function. The file, in this case, is the category. The documents inside that file represent the posts of a WordPress blog that belong to a given category. This broad container for posts is the best way to split things into general groups and direct user attention to one area of content or subject matter.

The problem with categories, and the reason for their supplementation with things like tags and custom fields, is that they really are a bit too broad for tight management of lots of WordPress content. Indeed, it’s sometimes preferable to categorize things as a “music” entry but also allow users to read all music entries that review a given artist, or those entries that mention a specific album. This is where tags become particularly useful and relevant to a modern-day WordPress installation.

The Tag: When and Where it’s Appropriate for Use Within WordPress

WordPress has included tag support for the better part of the past half-decade, introducing it alongside the 2.x series of releases between 2003 and 2007. Tags were released amid much fanfare, at least by the most proficient content managers in the then-much-smaller WordPress community. Since then, however, they have been greeted much more frequently with confusion by newer WordPress website administrators or those who missed the memo on their relevance and importance. To understand tags, let’s first discuss what should not be done with this form of taxonomy within a typical WordPress installation.

If a website owner is creating a new album review for the website, they would not use a tag to categorize the content as “music” or an “album review.” That should be obvious, given the above discussion on the relevance or utility of categories. This, however, is a teachable moment: Tags are about specific things that set an entry apart from all others in the same category. They allow groupings to be made between these entries based on significant commonalities shared among them.

A WordPress website administrator or author should never use a tag to list things like the year of the album, the number of tracks, the release date, or any other information that could be shared among all kinds of content within the WordPress website. If the site focuses on media reviews in general, and looks at things like music, videos, concerts, and other things that need to be reviewed, a release date tag would be confusing and mix the different kinds of media.

Instead, the tags assigned to a music entry that discusses and artist or reviews some albums should be both unique and significant. These tags should absolutely not focus on things that are shared across virtually every album: release date, number of tracks, price, etc. Tags like the name of every artist featured on the album, or among all the albums grouped together in a single review, should be included.

What About Specifics? Diving in Deeper with Custom Fields

In order to describe the relevance of the WordPress taxonomy as it relates to the tags feature, it was made clear that things like track numbers, release dates, prices, and other information, are not appropriate for inclusion in the list of a post’s relevant tags. If that’s true, then most users are probably confused as to where this information should be stored for easy indexing of content using things like price and track numbers. Well, that’s what the custom fields are for. This feature is pretty much ignored by the vast majority of WordPress users, however, so it might be worth knowing how to enable these fields and how to make them relevant to a post’s content going forward.

To enable custom fields, WordPress website owners should log into the Dashboard and head to the “Add Post” page as linked to by the Dashboard sidebar. There, a gray tab will appear at the top of the page that reads “Screen Options.” This should be clicked, and a menu will slide down listing a number of widgets appropriate to the content creation page. Among these options will be “Custom Fields,” and the checkbox next to this option should be clicked. The configuration area that pertains to these fields will then automatically and instantly appear below the box where the website’s content is written. 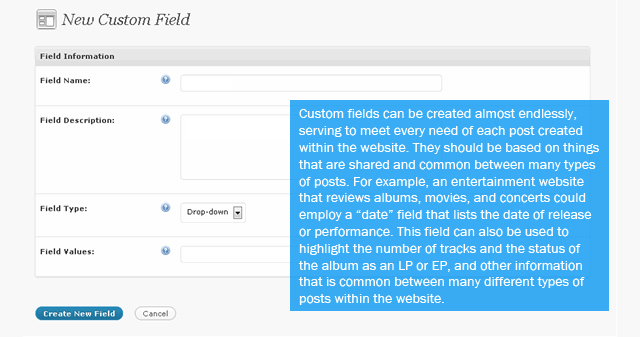 Custom fields can be created almost endlessly, serving to meet every need of each post created within the website. They should be based on things that are shared and common between many types of posts. For example, an entertainment website that reviews albums, movies, and concerts could employ a “date” field that lists the date of release or performance. This field can also be used to highlight the number of tracks on the album, the status of the album as an LP or EP, and other information that is common between many different types of posts within the website.

This is done for a number of reasons, but one of the most relevant is that of speed. Simply put, it’s far easier for the WordPress database to list tags than it is for the database to fetch and return the post’s meta information as entered into custom fields. That’s not to discourage their use, of course, but it simply makes more sense to employ the faster tags option throughout the website to get an increase in speed and a decrease in database queries wherever possible.

Despite These Best Practices, It’s Still Up for Debate

Custom fields, tags, and categories, have existed alongside each other for the better part of the past half-decade, and categories have been a standard WordPress feature since its introduction to the content management marketplace. And yet, despite all of that time and the years of development that have ensued, there has yet to be an official agreement between the software’s many users about the best use of each feature. Indeed, while it’s generally accepted that categories are the broadest element of taxonomy, while custom fields are the most intricate, there is a lot of disagreement about which type of information should be considered the “most intricate.”

Some people don’t think that release dates are actually that detailed at all, and they instead prefer to place album names and artists into the post meta fields instead of into the tags section. This reversal represents the most common and significant alternative viewpoint when it comes to taxonomy, and it means that websites everywhere operate just a little differently when classifying and categorizing their own content. That creates some significant usability headaches for the average reader who has to learn every site’s approach to categories, tax, and post meta information via custom fields.

The best approach to take when pursuing an in-depth taxonomy of posts is simply to be consistent about whatever type of approach that is eventually chosen to tag posts. Adhere to universal rules, like the importance of a broad category, and try to adhere to a “common practices” approach when using things like post tags and post meta custom fields. At the very least, the site’s consistent approach to classifying its posts will be easily learned by users who will then understand how the site perceives artist names, track titles, release dates, and genres. And, given the ongoing debate about the relevance, importance, and best uses of tags and post meta information, that might be the best thing that most website owners can hope for until there’s an official specification released that deals with these three ways of content containment.

Be Sure to Backdate Posts with Classification Information

Those WordPress website administrators who are new to taxonomies throughout their installation should be sure to apply their consistency to older posts, as well as those that will be published after the system is initially implemented. This is the kind of consistency that will promote user understanding, and applying it to older posts will serve as an example for authors when they’re deciding on things like the post’s category, tags, and any data that should be inserted into a new or existing custom field.

After implementing the new system of classification, it might even be a good idea to introduce the system to the website’s readers and explain to them why this is an important new way to browse content. Explain the virtues of custom field data, and how the tags relate to the both the content and the selected category. They’ll pick up on it pretty easily, as long as its explained appropriately, and the site will benefit as its content becomes more searchable and usable over the long-term.

Above all else, remember that this tutorial merely represents a series of guidelines and not a strict approach to taxonomy. This field is still developing, and website owners should understand that before they even assign their first post tag.