Why iOS7 Does and Doesn’t Reflect Apple’s Core Brand

A few months ago, Apple released their long-awaited iOS7 update to users around the world. It was the single biggest visual update to iOS since the release of the original iPhone in 2007 and as you may already know, a lot of people aren’t too happy with the redesign.

Apple has been subjected to fierce competition in the smartphone market over the last couple of years (primarily from Android) and after more than six years without a redesign, iOS6’s skeuomorphic design was begining to look pretty tired. Not good news in a fiercely competitive market.

Unlike almost all other brands, Apple actually produces both the software and hardware for their devices but Apple’s core product is definitely their software (i.e. iOS). In some respects, the iPhone hardware actually acts as the product packaging as Apple is primarily a software company. It’s the software that makes their devices unique.

As this guide on rebranding and redesigning product packaging points out, brands often opt to redesign their product packaging with the aim of quickly increasing relevancy and to draw attention to their brand, but in Apple’s case, they opted to do the opposite. Rather than redesign the iPhone hardware (i.e. the packaging), they opted to redesign the software (i.e. the core product), even though some would almost certainly argue that the iPhone hardware is just as overdue for a redesign as iOS itself.

Now, given the fact that an estimated 79% of all iOS devices are now running iOS7, iOS7 should offer a perfect reflection of Apple’s core brand, but is this actually the case? Well, yes and no. 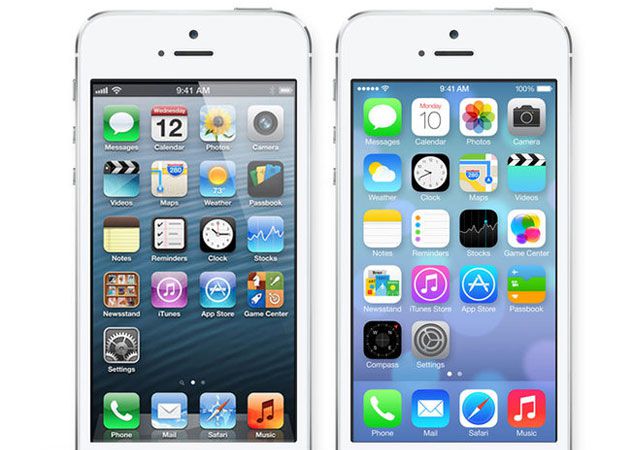 When you compare iOS6 and iOS7, it’s instantly obvious that the redesign is far from subtle. Every aspect of the operating system has been entirely redesigned. It’s this redesign that has received quite a backlash from many Apple customers (and design critics of course) with many commenting on how childish the new ‘neon’ colour scheme looks. This is where the problems begin; I mean, since when has Apple ever been remotely classed as ‘childish’?

A lot of people have also commented on how iOS7 appears to take a lot of inspiration from Android and to be honest, there are certain areas where you would have to agree. 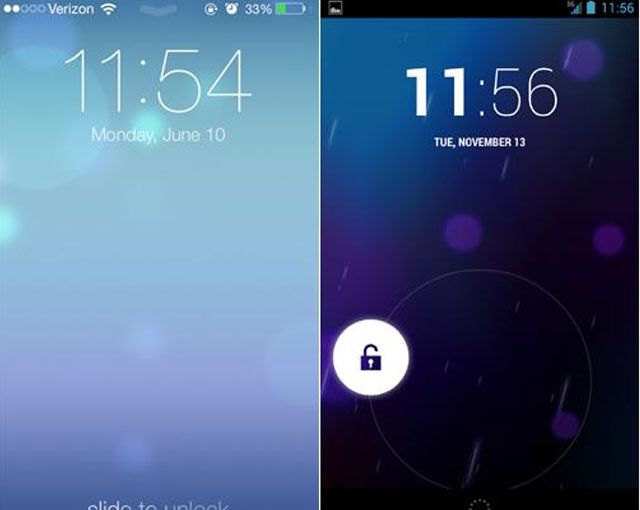 If you take a look at the comparison of the iOS7 vs. Android Jelly Bean lock screen above, you’ll notice a lot of similarities. Now, I’m Apple’s biggest fan but even in iOS6, it was pretty clear that Apple borrowed aspects such as the notification centre from Android. While many consumers might not have noticed this subtle copying in iOS6, iOS7 has brought the UI of Android and iOS closer than ever before and now it’s pretty much impossible not to notice some similarities.

This is one of the reasons that I personally think iOS7 is a poor reflection of Apple’s core brand. For decades, Apple has been known as an innovative company, the company that simply doesn’t care what their competition is doing as they’re going to do things better anyway. It’s a somewhat arrogant view but it’s almost always worked. It was proven when they released the original iPhone as there was quite literally nothing like it on the market at all, it was a hugely innovative device.

While it’s evident (at least to me) that Google initially swiped many features of iOS for early Android releases, it seems that the tables have now turned. Apple appears to be ‘borrowing’ features from Android and this certainly isn’t what the Apple brand is known for. 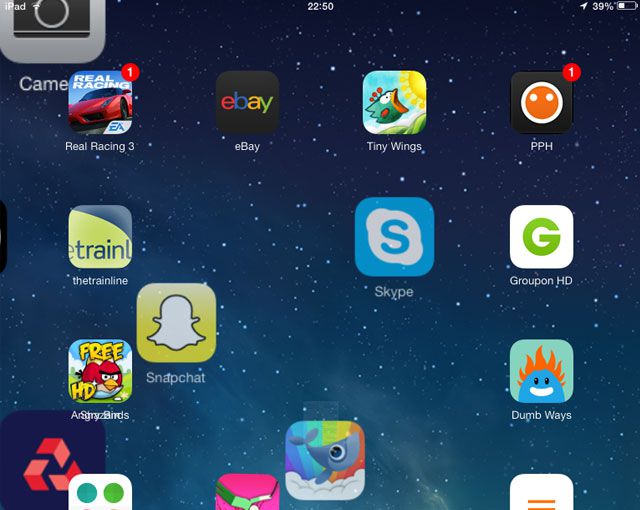 Anyone that has upgraded to iOS7 (including myself) is likely to have experienced a few glitches in the last few months. While Apple has been quick to issue updates and patches for the most serious bugs (e.g. security bugs), there are still a lot of bugs remaining and to be honest, they’re annoying.

In all honesty, there’s always going to be a few bugs when such a major redesign is released and while Apple certainly hasn’t got things as wrong as Microsoft usually do with Windows (just look at Windows Vista for example), I believe that there’s more bugs than there should be.

The above screenshot is actually taken from my own iPad Mini and as you can see, things aren’t how they should be. I admit this was a one-off but I’ve also experienced problems with iCloud synchronisation and many other aspects. I also personally think the Calendar app is terrible and that there are many inconsistencies in the UI design (the inverse gradients on the Mail and App Store icons for example). It’s also annoying how the old iOS6 keyboard appears in roughly half of the apps used; I honestly see no reason why this has to be the case.

Once again, it’s here that I believe iOS7 fails to reflect Apple’s core brand. Apple is known for releasing products that are as close to perfect as can be, even if doing so means that they’re late to the market. It seems that this time, Apple has given into pressure from the competition.

We also have to remember that Apple is a premium brand and their products are sold at premium prices. An iPhone 5S is almost double the price of Google’s Nexus 5 handset and aside from Touch ID, many would argue that the iPhone 5S falls short in comparison.

The bottom line is that you pay a premium for Apple products because they’re known for their attention to detail and desire for perfection. The current buggy iOS7 certainly falls short of these expectations.

Fragmentation Between iOS7 And Mac OSX 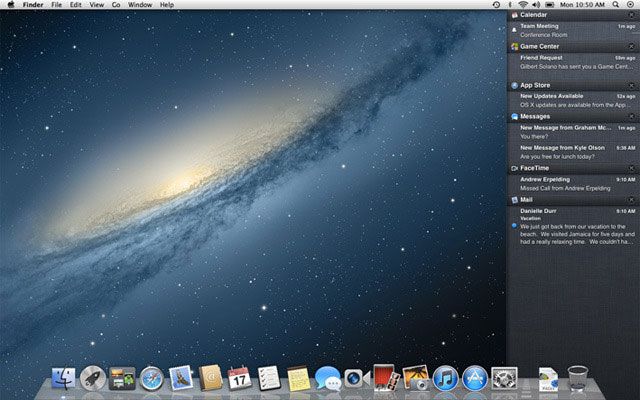 One of the reasons that Apple doesn’t licence their software to other hardware manufacturers is to ensure perfect harmony between software and hardware. If you’re lucky enough to own both an iPad and iPhone running iOS7, you’ll notice that the design is consistent between both devices as they’re both running the same OS.

Obviously, Mac OSX is an entirely different operating system but prior to iOS7, the design of iOS6 and Mac OSX was consistent too. iOS6 featured the same visual style as Mac OSX and many of the icons were the same too (e.g. Safari and Calendar). Now, with the release of iOS7, there’s fragmentation between the two operating systems.

If you look at the image above (which is a screenshot taken from Mac OSX Mavericks: the latest version of Mac OSX), you’ll notice that the design is still reminiscent of iOS6. Perhaps the most obvious example of this is the Notification Centre which clearly features an iOS6-like design.

You’ll also notice that the overall colour scheme and many of the icons are completely different in OSX than in iOS7.

For me, this is yet another frustrating reason why iOS7 fails to represent Apple’s core brand. Apple are constantly striving for harmony between software and hardware as well as the various offerings of their product line but clearly, iOS7 falls short.

If you compare the UI of iOS7 and Mac OSX in the image above, you’d be forgiven for assuming the operating systems were created by entirely separate companies. If you compare this to Windows 8 (dektop and mobile), you’ll notice that Apple falls short in terms of creating a consistent experience across their entire product line.

Clearly, iOS7 fails to reflect Apple’s core brand in many ways. It’s far from perfect, there are many design-related errors, it’s buggy, the design is inconsistent with Mac OSX and perhaps worst of all, it almost certainly copies Android in some respects.

Despite the many problems though, I think there are a few ways in which iOS7 is the perfect representation of Apple’s core brand. For a start, it’s certainly a bold and ambitious design and you can clearly see what Apple was trying to achieve, it’s just a shame they fell a little short this time.

What’s more, despite the fact that many of the people upgrading to iOS7 don’t like the iOS7 experience, Apple has offered no way out. With Apple products, the deal has always been that Apple decides what is best; the user has very little control over the visual aspect of the UI when compared with something like Android.

It’s nice to see that Apple are still making bold design decisions and aspiring to be the best, I just hope the bugs are sorted out soon!