The Lies People Tell You About Landing Freelance Gigs Online

A study from Payoneer found that the average freelancer makes $39,000. That’s… not great, if we’re being honest.

It’s lower than most salaries in major U.S. cities for design, development, and other creative work. Taxes and insurance alone would cut that number in half.

That means while many freelancers can make a decent living, it’s not exactly a great living, either. Top freelancers, on the other hand, repeatedly pull in well over $100,000 each year.

So what accounts for that wide margin? Top freelancers pull in over twice what the average makes in a year. There are obviously tons of potential answers. However, there are three major freelancing ‘lies’ that often contribute to people earning less than they could (or should).

Here’s how to spot and solve three major ones.

Lie #1. You can rely on job boards for new work.

Job boards are the easiest place to find new work. And they do work well to a certain degree. People (and companies) with money and a problem are looking for someone to help them solve it.

So on the surface, it seems like a match made in heaven. When you have a project or client winding down, you start scouring job boards for new potential ones to replace it.

What could possibly be wrong with this model? At first, nothing. But over the long haul? Everything.

Job boards are filled with the lowest hanging fruit. These jobs are cheap and competitive. Dozens of people might apply to a single job, helping the hiring company to simply stack them in order of cheapest to most expensive.

That’s not a big deal if you need the work. The problem is that these jobs keep you busy, but don’t deliver a ton of extra profit to keep you flush when the work ends, either.

It’s like a hamster wheel. You need to keep running in circles, making just enough money to pay your bills but not enough money to actually save for slower months, or reinvest in subcontractors, tools, etc.

Job boards also put you in a reactive position. The hiring organization dictates the terms they’re looking for, and you can either agree or move on to the next one. You don’t have a lot of control to help build the value behind your higher-than-average rates, or push back on the client when the scope is unreasonable. The client is definitely not always right. But the person paying the money always thinks they are.

The hard part is to not be so busy with cheap work that you don’t have time to build a name for yourself (or do the other two items on this list).

So pick up a few gigs from job boards if you need them. However, try to know what you’re looking for to separate the “pretty good” from the “bad” ones.

For example, this one looks pretty good on the surface: 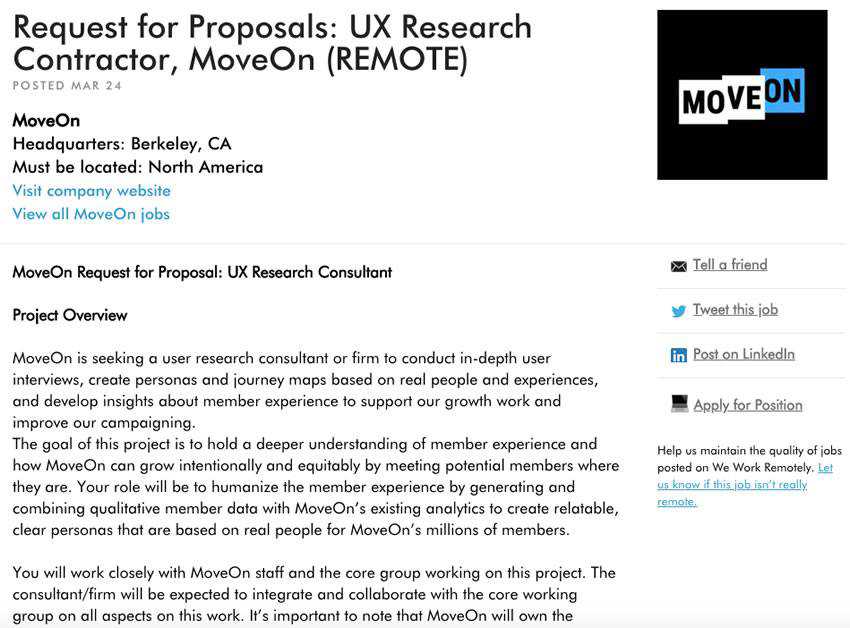 Here is the scope and timing:

It looks like a decent option and I’m sure the company is great. But it does contain a few silent landmines if you’re not careful.

For starters, it’s open RFP casting call. They want a bunch of people to submit potential pricing for ill-defined deliverables. That means people replying to this will probably just be guessing based on each line item, and not pricing enough for fear of coming in too high and missing out on the gig.

Second, this was posted on March 24, they expect to start in April, and conclude in June. It’s going to take them at least one to three weeks to hire someone. That means the consultant essentially has around two months to do three months worth of work.

Third, they mention multiple times that you’ll be working closely with their internal team. Once you’ve been doing this awhile, you’ll realize that’s a euphemism for “we want you to basically be a full-time employee for two months, always on call, without actually compensating you like a full-time employee.”

I know this all sounds harsh. But the person that gets hired will need to hit the ground running, deliver immediately, and drop other client commitments, all while pricing “competitively” (aka not as high as they should price it).

Let’s say this project goes well. Awesome. Unfortunately, they probably won’t have any time left over during it to work on landing clients to start right as this project ends. And the “competitive” pricing means they didn’t include enough profit to live off for a few weeks while they can find something else to take its place.

See how this works? Rely too heavily on projects like this and you’re constantly stuck trying to keep up, instead of getting ahead.

Lie #2. You don’t need to specialize.

Certain types of doctors always make the most money.

The highest earners, every time a study is done, range from orthopedic surgeons to radiologists, cardiologists, and anesthesiologists. A study featured in Time confirms that all of these specialties make well over $300,000/year on average.

Now, guess who makes the least?

That’s right: generalists. Pediatricians and family practitioners, who are like jack-of-all-trades doctors, earn the least around $156,000 and $158,000.

The highest paid developers, for instance, are usually in a specialized programming language. Monster reports that Scala developers pull in an average salary of $125,000/year.

Compare that to someone helping small business owners of all shapes and sizes overhaul their basic WordPress site and you can see where this is going.

Part of it is supply vs. demand. But part of this is also the extra ‘value’ a specialized expert can deliver (in terms of a higher ROI, getting the job done at a higher quality and turned around faster, etc.).

In the writing space, the lowest common denominator for ‘generalists’ would be a service like Textbroker. Check out this pay table:

Let’s do some quick math. Take a 2,000 word article, and the most you can make on that lowest tier is $14. Yes, $14 total. That would break down somewhere between $3.50-7 per hour–well below minimum wage in pretty much every state across the U.S.

The solution is to specialize as much as you can, in everything from the clients and projects you take, to the specific service you deliver.

Compare that $14 job that’s open to anyone for this job that’s going to pay at least $200+ per article for someone who has experience in this vertical:

That’s not even the top of the market for writing, but it’s already a 1,329% pay increase! In other words, you don’t have to be the best of the best in your field to see a huge jump in compensation like this.

You just need to carve out a specialty that makes you an expert at something difficult or rare.

Lie #3. Your portfolio will bring in new clients.

Companies don’t just hire freelancers because they cost less, but because they also have as much (or more) experience in a given specialty than their other in-house employees. 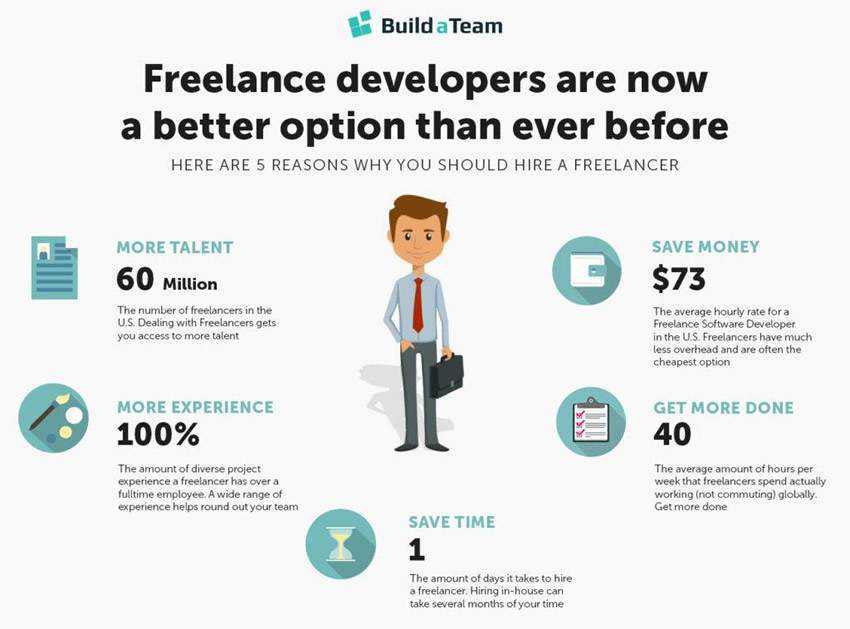 So make a website to showcase your past work, projects, clients, skill sets, and case studies. That should be the very first step you take after deciding to freelance. 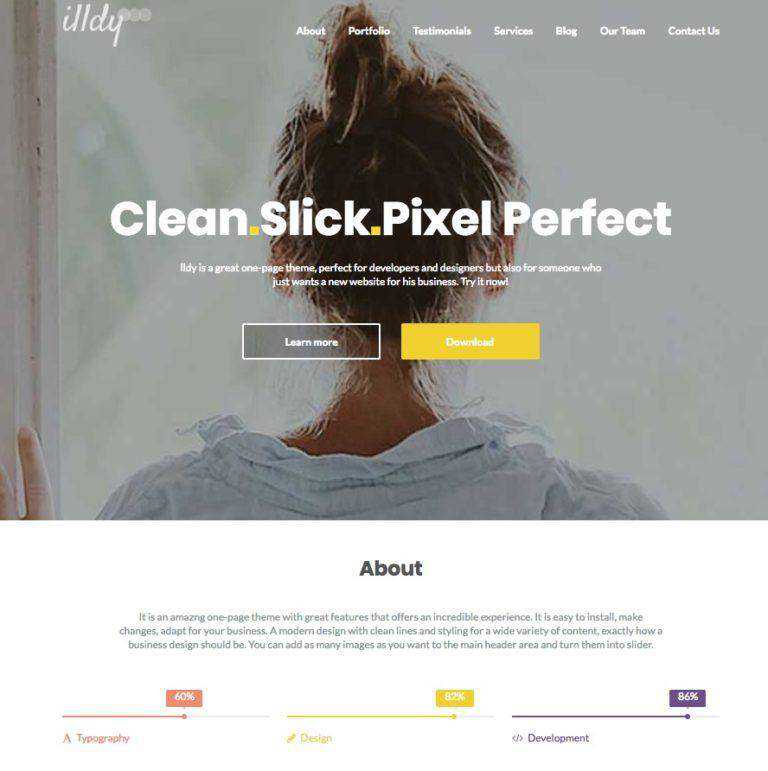 Your future work will come as a byproduct of your past work, so keeping a portfolio website up to date is an absolute must.

However, just having a portfolio site sitting around isn’t going to help you land new clients. It will only help you convert them once they already know who you are.

For example, designer Robert Williams actually deleted his portfolio (not recommended) and actually made $30,000 in six weeks by diligently doing email outreach to new potential leads.

It wasn’t by sitting around, waiting for people to discover him.

Deleting his portfolio forced him to stop activities that weren’t working, like “twitter, facebook, blogging, dribbble, reading emails and more.” And instead, he started proactively reaching out to companies, pitching his value based on howhis design would improve the client’s business.

Compare that to most web designers, who want to talk to clients about specific design elements that they probably don’t understand. If a client doesn’t realize how pixel-perfect design might help them, they won’t be willing to pay for it.

So keep your portfolio up and ready to help prove what you can do. But just understand that you’re going to have to go out and find potential people who might benefit from what you do (as opposed to waiting for the ‘perfect’ opportunity to roll by on a job board).

LinkedIn’s Sales Navigator can help you create lists of the types of clients that typically work best for you. And then you can login each day to track what they’re posting, commenting, or doing to slowly start building up familiarity with each. 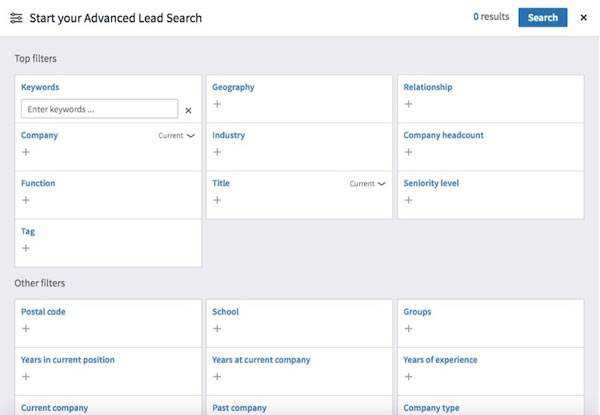 The bigger the potential opportunity or client, the more leg work you might have to do. That might mean attending a conference of people with your target clients even though it might set you back $3,000-10,000.

That sounds like a lot of money because it is. But committing to this big expense might also force you to do more leg work to contact people before you attend, set up private dinners with potential future clients, and knowing exactly where sponsor booths are going to be.

PipeCandy shared an excellent case study of how they ‘hacked’ a conference to land 120 high-value leads. These are the kinds of people who’re too busy to sit in a webinar or download your book. But you can get some valuable face time if you already know where they’re going to be and what they’re going to respond to.

Freelancers can (and should) make a lot of money. They’re risking a lot to control their own destiny and help clients of all shapes and sizes. However, according to the data, most freelancers don’t make enough.

One reason is because they’re too reliant on getting work from job boards, where the competition is immense and it’s difficult to price high enough to actually make any money. Another reason is the lack of specialization. General work is often average or replaceable. So only the specialists in a particular type or service, client, or project tend to make the most.

Last but not least, a portfolio is absolutely essential to landing new work. But it’s often not enough by itself! You need to combine it with more proactive outreach and networking to make sure your pipeline of projects is full months in advance.

What separates the best paid freelancers isn’t just their skill set or ability, but their lack of experience around the business of freelancing.